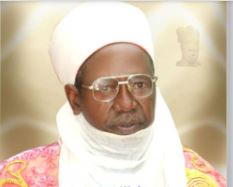 The Paramount ruler of Jaba Chiefdom in Kaduna State, Dr.Danladi Gyet Maude has been released after spending 2 days in the kidnappers den.

Anthony Maude, a brother to the first class chief in Kaduna state, told journalists on phone that the monarch was released in the evening on Wednesday.

The 83 year old Dr.Gyet Maude was abducted last Monday while on his farm in the neighboring Gitata community of Nasarawa State.

Although his abductors later demanded for a N100 million ransom before he would be released, Anthony Maude did not give details on whether the ransom was paid or not.

It was also not disclosed whether he was rescued by security agencies.

The authorities are yet to react on the development.

Earlier, the Chief of Kajuru in the state was abducted at gun point in his palace, but was released with an apology from the hoodlums.

Some of his family members and the Kajuru palace aides are still in captivity.