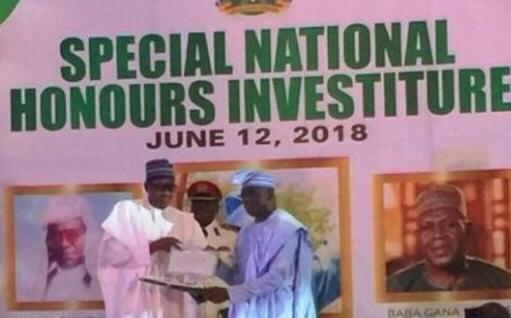 The National Democratic Coalition (NADECO) has on Tuesday urged President Muhammadu Buhari to restore true federalism in the country.

The group added that Nigeria’s prospects for growth and development could only be achieved by returning the country to the “federal constitutional arrangement.”

The group spokesman, Ayo Opadokun, during a news briefing marking the 25th anniversary of the June 12, 1993 Presidential election in Lagos on Tuesday, decried that Nigeria was being governed centrally while adding that the government should stop deceiving Nigerians about practising federalism.

He said, “President Buhari should accept the fact that Nigeria’s prospect to genuine unity, expected growth and development can only be a reality if his government accepts the popular will expressed by the majority that our country should return to the federal constitutional arrangement

“This demand is proved by the fact that until the unfortunate military insurrection against the democratic government on January 15, 1966, the regional governments were relatively productive and responding creditably to the genuine wishes and aspirations of their people.”

Opadokun advised that returning Nigeria to true federalism should not be in accordance with a partisan predilection but as approved by the people genuinely elected by them and not by the government or a compromised legislature.

He said, “Centralisation of the vital public sector by various decrees and the appropriations of all the major regional means of raising resources to the central government have crippled the component units since then. Most states now depend on the monthly allocations to run their bloated bureaucracies.”

“Nigeria should stop living a lie by calling itself a federation when it is, in fact, being governed centrally,” Opadokun added.

NADECO, however, commended Buhari for declaring June 12 as the Democracy Day, describing it as a courageous act.

The group urged Buhari to recall the Chairman of the defunct National Electoral Commission, Prof. Humphrey Nwosu, to formally declare the results of the June 12, 1993 Presidential election.

NADECO also demanded that the President should posthumously inaugurate Bashorun Moshood Abiola as a president of Nigeria and a national monument named after him.

NADECO, however, urged Buhari to encourage the electoral body to be impartial in the conduct of the 2019 general elections to ensure free, fair and credible polls.

The Aare Ona Kakanfo of Yorubaland, Chief Gani Adams, Senator Shehu Sani and a political science lecturer at the University of Lagos, Dr. Derin Ologbenla, on Tuesday, also called for transparency in the nation’s electoral process.

They spoke at an event in Lagos organised by the Oodua Peoples Congress to mark the 25th anniversary of the June 12, 1993 presidential election. The event was titled, “Nigerian politics and the democratic process: MKO Abiola and the June 12, 1993 crises and beyond.”

He said, “Our democracy has been so monetised to the extent that to sane Nigerians, it defies logic. The resultant effect of this is that electoral malpractices become the order of the day. From delegate election during party primaries to general elections, victory is for the highest bidder.”

Adams noted that joy had finally come after 25 years of struggle with the recognition of June 12 as Democracy Day by President Muhammadu Buhari and the conferment of GCFR on the acclaimed winner of the election, the late Chief MKO Abiola.

He stated, “As we celebrate the 25th anniversary of the epoch-making event, let us look beyond the past and focus our efforts in righting the wrongs of past leaders.”

Also, Sani said that the political class betrayed Abiola, adding that the leaders of the Social Democratic Party were “betrayers and Judas Iscariot.”

“Without NADECO, CD, the late Chief Gani Fawehinmi, ASUU, NLC and NUJ, June 12 would have been buried. We accept the gift (June 12 as Democracy Day) but reject the political motive behind it,” Sani stated

On his part, Ologbenla said the country’s political parties were undemocratic, adding that the military used ethnicity and tribal lines to divide Nigerians after annulling the election. Besides, a former governor of Abia State, Chief Uzor Kalu, said in a year’s time, he would reveal those who stalled June 12, adding, “Those who people think stalled it are not the ones