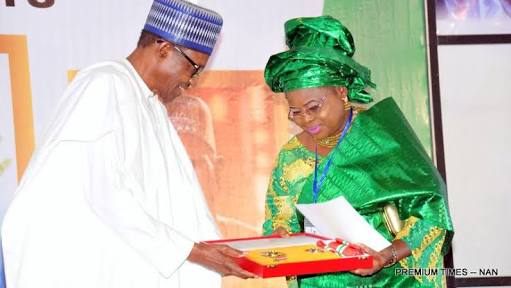 REMARKS BY HIS EXCELLENCY MUHAMMADU BUHARI PRESIDENT OF THE FEDERAL REPUBLIC OF NIGERIA AT THE COMMEMORATION AND INVESTITURE HONOURING THE HEROES OF JUNE 12 1993
WEDNESDAY 12TH JUNE, 2018

Today, I am very happy to be present and to preside over the Commemoration and Investiture, marking the formal official Federal Government recognition of June 12 as National Democracy Day.

2. The decision and this event is not meant to be and is not an attempt to open old wounds but to put right a national wrong. Nigerians of their own free will voted for Late Chief MKO Abiola and Amb. Baba Gana Kingibe, the Presidential flag bearer and running mate of the Social Democratic Party (SDP) in the 1993 elections. The Government of the day inexplicably cancelled the elections when it was clear who were going to be the winners.

2. We cannot rewind the past but we can at least assuage our feelings; recognize that a wrong has been committed and resolve to stand firm now and in the future for the sanctity of free elections. Nigerians would no longer tolerate such perversion of justice.
This retrospective and posthumous recognition is only a symbolic token of redress and recompense for the grievous injury done to the peace and unity of our country.

3. Our decision to recognize and honour June 12 and its actors is in the national interest. It is aimed at setting national healing process and reconciliation of the 25 year festering wound caused by the annulment of the June 12th elections. I earnestly invite all Nigerians across all our national divide to accept it in good faith.

5. Accordingly, on behalf of the Federal Government, I tender the nation’s apology to the family of Late MKO Abiola, who got the highest votes and to those that lost their loved ones in the cause of June 12 struggle.

6. At this juncture, Ladies and Gentlemen, I would like everybody present to stand and observe a minute silence in honour of the memory of Chief MKO Abiola and Chief Fawehinmi and indeed all those who lost their lives in the struggle of June 12 1993.

6. Thank you all and God bless Federal Republic of Nigeria.

National News Saint Mienpamo - May 17, 2022 - 2:03 pm 0
The Governor of the Central Bank of Nigeria (CBN) Mr Godwin Emefiele, has dispelled widespread rumours that he would be contesting for office of...

National News Saint Mienpamo - May 17, 2022 - 2:00 pm 0
Samuel Ortom, govenor of Benue state, on Tuesday, visited former President Goodluck Jonathan.  The meeting was held at the residence of the former president in...