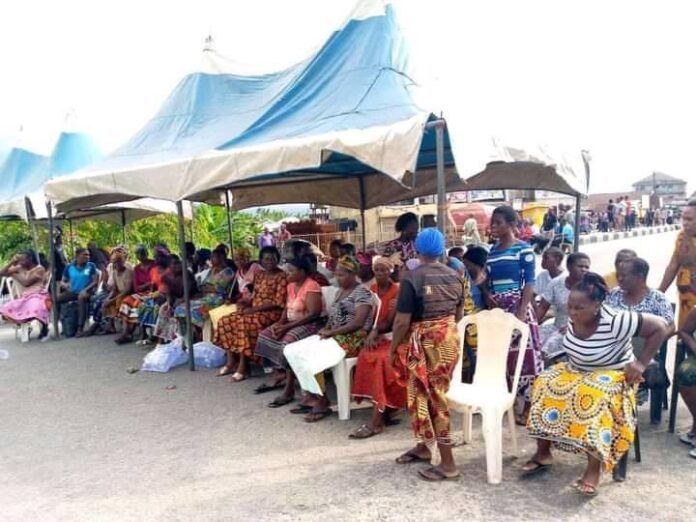 There was a protest at the Biogbolo area of Yenagoa, the Bayelsa State capital on Saturday over the death of a 27 years old man, Goodluck Oviekeme who was arrested alongside eight others over allege attack on a Policeman and theft of his service rifle.

The police in a statement allege that the deceased was arrested on Tuesday in connection with an allege armed robbery incident that occurred at Biogbolo area when hoodlums attacked Police Patrol team, fatally injured Inspector Ugbotor Sunday and carted away his riffle.

Another senior Police source told NAIJA LIVE TV that the deceased was arrested alongside the Youth President of the troubled Biogbolo Community, Benjamin Karibo over their allege involvement in the attack on Policeman. And they are all in Police custody.

He told NAIJA LIVE TV that the deceased was not tortured or shot by police as claimed by some of the protesters.

She alleged that Oviekeme was murdered in the police cell and his body was later dumped at the Federal Medical Center (FMC), Yenagoa.

The protesters, who are made up of Epie-attisa indigenes resident in Biogbolo, staged a protest against the sudden death of Goodluck Ovikeme, accusing Police of allege shoddy investigation and deliberate killing of their kinsman.

Confirming the incident in a statement issued yesterday and signed by its spokesman, Asinim Butswat, stated that the State Commissioner of Police, Echeng E. Echeng has ordered for discreet Investigation and autopsy to determine the cause of death of Goodluck Oviekeme ‘m’ 27yrs.