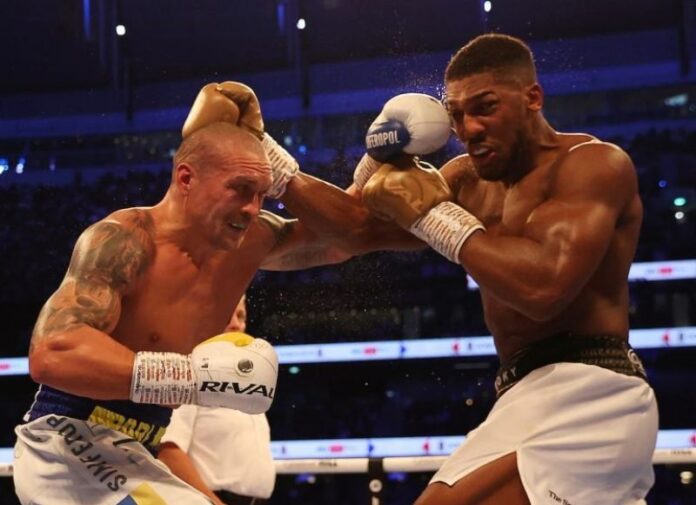 Oleksandr Usyk shook up the heavyweight division to become a two-weight world champion with a unanimous points decision win over Anthony Joshua for the WBA, IBF and WBO world heavyweight titles Saturday.

The Ukrainian’s footwork kept him out of trouble while his accurate jab and quick combinations piled on the points as he won by the judges’ scores of 117-112, 116-112, 115-113 in front of Joshua’s 66,227-strong home crowd at the Tottenham Hotspur Stadium in London.

Usyk (19-0, 13 KOs), 34, hurt Joshua (24-2, 22 KOs), 31, in the third and seventh rounds and almost finished off the English boxer amid a furious attack late in the 12th round. Joshua will want a rematch, but he failed to seriously threaten Usyk, who was quicker to the punch and more elusive.

Joshua, the naturally bigger man who has lost the titles for a second time in two years, is now counting the considerable cost of another shock defeat that ends his hopes of fighting English rival Tyson Fury for all four world heavyweight titles next year.

“A devastating defeat,” Matchroom promoter Eddie Hearn said. “Usyk is very fit, he’s got great feet, he threw a lot of punches. It was a tough defeat. [Joshua] got beat by the better man on the night.

“He will want to go straight back into the rematch. The desire is still there. He can do so much better in that fight.”

WBC champion Fury defends his title in a third fight with American Deontay Wilder on Oct. 9, but the winner of that fight could now pursue a clash with Usyk, who won the titles in just his third fight at heavyweight after unifying all four world cruiserweight titles in 2018.

Most of the world heavyweight title belts are now back in Ukrainian hands with Usyk’s success, after brothers Vitali and Wladimir Klitschko dominated the division while reigning as champions from 2004 to 2015, including one period when they held all four belts between them. Vitali was there at ringside in London to enjoy the moment. (ESPN)