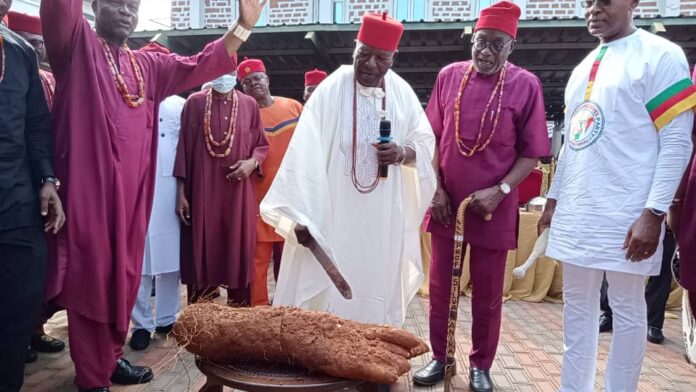 The monarch used the occasion to appreciate God for a peaceful reign in his kingdom as well as unveiled the project Design of Ukpo Museum Project.

The Chairman of Ukpo Ceremonies Committee, Ichie Sir Izuchukwu Nwabueze (Ichie Chinaemeze) described this years Festival as an improvement of the previous new yam as it featured award presentation to Ukpo Patriots who have made indelible marks in the education sector in Ukpo Kingdom.

The Awanji Lecture which had its theme as “The Role of Communities in the fight against insecurity in Nigeria” was delivered by Avm Humphrey Okpala RTD.

He commended Ukpo Community for its efforts in locating zone 13 Police Headquarters in the community and further urged them to continue to partner with the State and Federal Government to address the root cause of insecurity as well as embrace Community policing in their bid to tackle security challenges in the community.

The Ceremony witnessed the presentation of brand new motorcycle to “Eze Ji” king of yam as well as different masquerade dance.

The High point of the new yam festival was the presentation of Ukpo Community Service Award of Honour to Prof. Chinyere Stella Okunna, First Female Professor of Mass Communication in West Africa, Sir Dr. Daniel Chukwudozie, Chairman/CEO Dozzy Group, Avm Humphrey Okpala Rtd, Ichie Engr. Sir Gibson Okeke and other outstanding sons and daughters of Ukpo (Ukpo Patriots) as well as non-indigenes who made indelible imprint on the Education sector by construction of school building, Libraries and other infrastructures towards the advancement of Education in Ukpo Community.