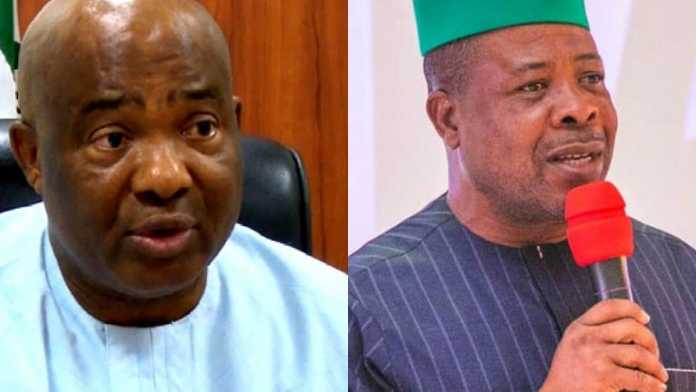 Mixed reactions have trailed the defeat of Imo State Governor, Emeka Ihedioha at the Supreme Court.

NAIJA LIVE TV had reported that the Supreme Court on Tuesday sacked Gov Emeka Ihedioha and declared APC’s Hope Uzodimma as the Governor of Imo State.

Delivering the judgment, Justice Kudirat Kekere-Ekun said the votes due to Uzodinma and APC from 318 polling units were wrongly excluded and should be added.

But reacting, some Nigerians while expressing surprises, wondered how APC who came fourth in the governorship election was declared winner.

@Angelgabbysharee, “You can’t undermine the influence of @OWELLEROCHAS in that state…don’t all forget that Uche Nwosu of AA withdrew from the appeal. Give it to Okorocha.”

@Omo Father Mbaka Church go full this Sunday. But actually Ihedioha didn’t make the required 25% in 2/3 LGAs in the state. It was either his sack or rerun. Rerun was most likely but here we are.”

@Chudi_chudia, “So where will Emeka ihedioha take his case of stolen mandate???Umuchigbo nike?”

@Ileowokikowo, “And Emeka Ihedioha already destroyed the foundation laid by Sen. Rochas Okorocha (@realRochas). As a usurper of the people’s will, I think Emeka should be tried and jailed and all the money collected in salaries refunded to the state’s purse.”

@ajuda, “Nigeriaaaaaaaa. You see why I don’t bother myself about Nigeria election again. You will just DIE.”

@Eli_alheri, “Hahaha now they will blame Buhari? I think democracy is in danger but when it go their ways all is fine.”

@adorablesusan, “Supreme court has removed Emeka ihedioha, political scheming in play..our judiciary has been messed up with politics, shame.”