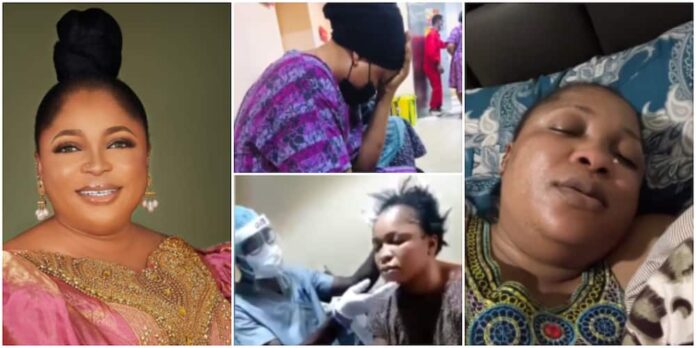 Kemi Afolabi, Nigerian actress, has taken to social media to recount her near-death experience in 2021 after she was diagnosed with an incurable disease.

In a lengthy post via her Instagram page on Friday, Afolabi said her ordeal started with intense breathing difficulty which made her spend over three months at various health facilities.

The film star said after a series of tests, she was eventually diagnosed with an incurable disease which can only be managed through medication.

The actress disclosed that amid the battle to save her life, she started preparing for death and even took several measures including writing her will and securing a burial space.

Afolabi said she also sold several of her properties to be able to raise funds to foot her medical bills.

She disclosed that though the experience has changed her forever, she is grateful to God for keeping her alive.

“I wrote my will and booked a space with ebony vault this year 2021 but God showed me how faithful he is despite my unfaithfulness. Who am I that God is so mindful of my existence?” she wrote.

“Me ordinary sand????? That was toss around from my private hospital to LASUTH, to Army barracks hospital… and finally LUTH where I spent over three months!

“I did COVID-19 test every 48hrs at LASUTH emergency because I was short of breath, was on oxygen for about a month, still no diagnosis after several test conducted.

“Only a mad man says there is no God ooo. Sold my properties after spending all my savings because I knew the thoughts of bringing my condition to the public eye or beg for funds at the time will kill me faster!!!

“Finally I was diagnosed of a condition that has no cure but can be managed by medications and takes me in and out of the hospital at will (SLE).

“Fluid blocked my lungs, affected my heart from functioning well which was the reason for my breathlessness and that is caused by the condition diagnosed! Surgery was the only option to drain out the fluid fast.”

The actress said it has been a struggle taking medications to reduce pains and ensuring that such does not affect her weight considering the entertainment industry places so much value on appearance.

“Being in an industry that places high value on appearance, it’s been a struggle taking medications that helps ease the pains but affect my weight and people will constantly remind you of how fat you’ve become without hesitations,” she added.

“If you rush into marriage, you’ll rush out like I once did” — Funke Akindele