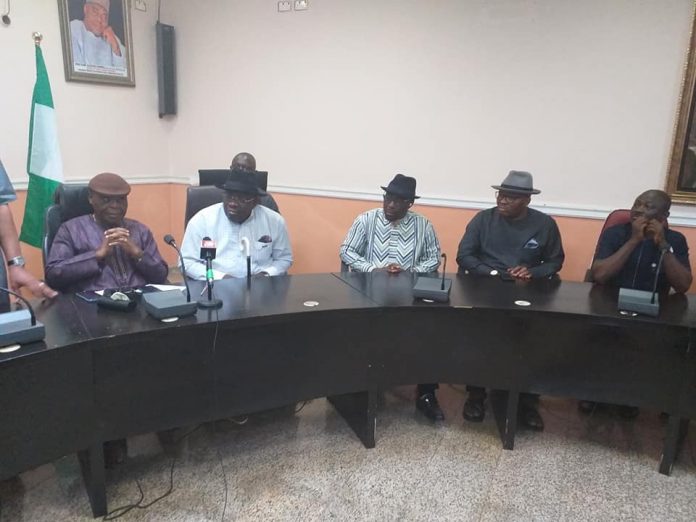 Bayelsa State Governor, Honourable Henry Seriake Dickson, on Monday, said the Peoples Democratic Party (PDP) candidate in the November 16 governorship election in the state would emerge through the right process and not by imposition.

He advised aspirants who believe in imposition of candidates to have a rethink.

Governor Dickson was quoted by his Special Adviser on Public Affairs, Mr. Daniel Alabrah, to have stated this while speaking to journalists during a solidarity visit to the headquarters of Daar Communications Plc at Asokoro in Abuja.

The broadcast licence of the media organisation was last Thursday suspended by the National Broadcasting Commission (NBC) but later lifted on the order of an Abuja High Court.

The governor said any of the aspirants that has the experience and capacity should make their case to the party and Bayelsans.

“In the primary election, there will be no form of manipulation. People talking about manipulation are anticipating that they should be imposed. I’m not going to impose any of them. Any of them who feel they have experience and capacity should go and make their case to the people of Bayelsa State.”

The governor also said that sustaining what he had done so far would be a decision of God Almighty and the people.

On the preparedness of the PDP for the November 16 election, Governor Dickson said he had made the party the most attractive platform.

“The PDP is the most prepared party. I have in the last few years built a solid, formidable and all-inclusive party such that even those who left found it as the most attractive platform to return to.

“I have made it very inclusive and everybody will be consulted. Every person that has a role to play would be allowed to play that role. The party leaders will play their role and delegates ultimately will decide who the candidate shall be.

“So I use this opportunity to call on those who are interested in the platform that we have worked hard to create to tell the state and us how farther they can deepen what has been started. The PDP is an all-inclusive, big and strong platform backed by concrete performance on ground with credible leadership.”

The governor described the closure of Daar Communications as a serious threat to democracy in Nigeria.

“A few days ago, we were shocked at the sudden closure of Daar Communications by the NBC. When we got the unfortunate news, we, the PDP governors, made our condemnation public.

“We thank the judiciary for its decision. The right of free speech should be the first to be protected. We consider what happened as a serious blow to our efforts to deepen the nation’s democracy and free exchange of views.

“We commmed Daar Communications for the great efforts in the interest of our country and democracy. If in the course of carrying out your duties you are accused, the due process should be followed instead of arbitrary abuse.

“Daar Communications has become a national institution. No one will be allowed to limit the rights of free speech, which is essential for the existence of our country. Great care must be exercised when matters of such are on. The task of building a democratic Nigeria is ongoing,” he said.

In his remarks, Chairman Emeritus of Daar Communications, High Chief Raymond Dokpesi, said at the age of 68, he had no regret staging a protest in defence of freedom of speech.

Chief Dokpesi insisted that the organisation did not breach the NBC code and was not guilty of any infraction.

He however disclosed that key stakeholders in the media industry have met with the NBC and that a truce had been reached.

“The fathers of the industry have waded in and met the NBC. I’m pleased to inform you that a truce was agreed upon that Daar Communications Plc should appoint an ombudsman,” he said.