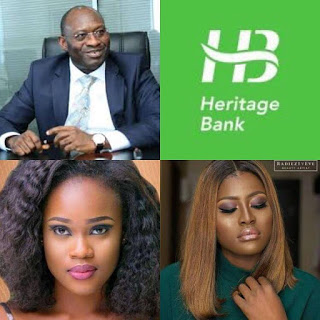 Unprofessional Behavior Of “HERITAGE BANK” Staff With Big Brother Naija Female Housemates Rubs The Banks Image & Reputation In The Mud, As The Bank Sends Warning Letter To Them

There is huge controversy rocking the whole system at Heritage Bank Ltd, one of the new generation banks over the involvement of some of their staff members with the female finalists of the just concluded Big Brother Naija reality show which the bank was a major financier.

Stories have it that the management of the bank is seriously frowning at the way and manner some male staff members of the bank related with female finalists of the reality show when they came on a courtesy visit to show appreciation to the bank for sponsoring the show.

There have been comments and posts made in outright condemnation of postures seen of some male staff members of the bank with female BBN housemates in the premises of the bank which is gradually generating bad publicity for the financial institution trying very hard to break even in Nigeria.

According to reports, some male staff members of the bank were seen in very intimate and compromising postures with both Ceec and Alex and these postures has generated bad comments and posts on social media, thereby painting the bank in bad light.

In their banks bid to stop future occurrence, a seriously worded warning was sent to all the departments of bank expressing the displeasure of the bank on the bad image the pictures had created with hopes that what happened during the visit will not repeat itself in the future.

Part of the warning sent out bank to staff members from the Corporate Communications department of the bank reads:

However, we also observed some inappropriate behavior (snide comments and derogatory remarks), which we would like to address via this medium. As a corporate organization, there are standards & values which we adhere to – and in this case – irrespective of the sentiments generated during and after the Big Brother Show. In view of this, we were all expected to be professional in our interactions with the BBNaija finalists during these visits in our premises – as they were guests of the organization. These inappropriate behaviours have a tendency of rubbing off negatively on the brand which could cause reputational damage to the bank. So, it is hoped that we all continue to charge those around us to display high levels of professional conduct at all times and even more so when wearing the HB brand mark. The seemingly insignificant social conduct of a single individual has potential to hard the bank.

It is expected therefore that the bank would put in place; systems that would help checkmate such occurrence as news have it the male partner in the now very popular SEX VIDEO of one of the BNaija female finalists, Alex is a male staff of HERITAGE BANK.

Expectations are high for the revelation on who the male counter-part in the sex video is, as we hope that a face is put to the picture soon to reveal who he is.