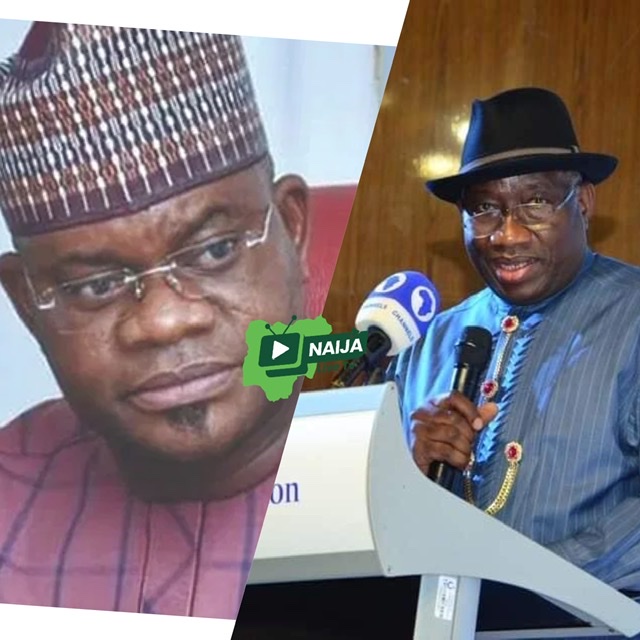 Governor Yahaya Bello of Kogi State has felicitated with the former President of Nigeria, His Excellency, Dr. Goodluck Ebele Jonathan, as he marked his 64th birthday with a lecture at the Transcorp Hilton, Abuja on Friday, 19th November, 2021.

Speaking at the well attended event which had the Senate President, several governors and past governors etc in attendance, he said: “Let me begin by once again felicitiating with His Excellency, Goodluck Ebele Jonathan, GCFR, former President of the Federal Republic of Nigeria and International Statesman Extraordinaire on his 64th birthday this Friday.

“His Excellency is a man who has earned the right to celebrate the increase of his years on earth with fulfilment. In 2015, he demonstrated in very historic terms that he is a democrat indeed and a patriot par excellence.

“Where lesser men and less honourable men would have tried to subvert the apparent will of the people in that year’s General Elections, His Excellency as the President of Nigeria and Commander-in-Chief of her Armed Forces, took the path of personal honour and national interest. Nigeria, and indeed the world, will always celebrate this wonderful man for that singular feat of selflessness and love for nation.

“‘Democracy and the Unity of the State’. Unity is the primary hypothesis on which democracy stands in any state which has chosen it as the form of government.

“This is because in a functional democracy the people, in spite of their diversity in ideology, faith, tribe and politics, have to always unite in a majority for most things to happen in the society, including leadership. Nigeria’s 4th Republic is now in her 22nd year but, unfortunately, we remained a shaky democracy tottering along like a toddler still learning to walk.

“Consequently, we hardly speak with a united voice on anything as a nation. This state of affairs makes me believe that we need more democracy, not less. Of course, by ‘more democracy’ I mean the real essence and practice of democracy, that pure marriage of consensus which enthrones the overall public good rather than any sectional or parochial interest.

“With the foregoing in mind, I say that how to make Nigerian Democracy work for us as a uniting factor rather than the divisive measure we have turned it into, is the most pressing need of the season, especially as gladiators begin to take position for 2023. Your Excellencies, ladies and gentlemen, I declare that ‘One Nigeria’ must quickly come to mean more than it currently does to the average citizen or we risk losing more than we bargain for – as leaders and those being led.

“For the records, my concept of a united Nigeria is not one where everyone is held down by force or fear, but a nation which guarantees all citizens security, unity and peace. It must be equitable and allow everyone to thrive on his own merits. Tribe, religion and class must not be used to discriminate against or marginalise anyone and civics must encourage cooperation and integration as a cardinal tenet of citizenship. We have to start substituting place of residence for state of origin and finding ways to immediately and brutally punish corruption in private and public spheres.

“Our politics and leadership must transform into a service that ensures the quality of life is high despite social status while essential goods and services are affordable. Our local job markets must deliver jobs to people at their levels of learning, skills and experience. The nation must have economic stability and be a family-friendly place where parents can raise the next generation well. We will require income equality, especially across the genders. A united Nigeria will thrive on political stability and social security.

“It also goes without saying that the quality of the public education system and that of the public health system must be high. Both must deliver free to affordable services. It is only then that people will belong because they want to, not because they must.

“It is to these ideals that I have committed my leadership to achieving in Kogi State and while we have not yet arrived, we have definitely journeyed a good part of the way. Kogi is the emerging paradigm for cooperation and integration as a basis for citizens’ co-existence instead of the previous divide and rule tactics with which failed politicians harmed citizens in our past. It is a paradigm we hope to expand and export to the larger Nigerian society as we march into the future while building an increasingly peaceful and prosperous Nigerian society. Nigeria is the trigger of Africa and if Africa must free herself from neocolonialism, Nigeria must stand up and take her place of leadership in the continent.

“‘Democracy and Unity of the State’ is a timely theme at this moment in Nigeria’s democratic journey as a nation. The Goodluck Jonathan Foundation and her continuing work in Democracy and Good Governance must be commended for again demonstrating uncanny understanding of, not just the State, but also the Mood, of the Nation,” he concluded.

2023: I will succeed Buhari, sworn-in as Nigeria’s next president – Yahaya Bello