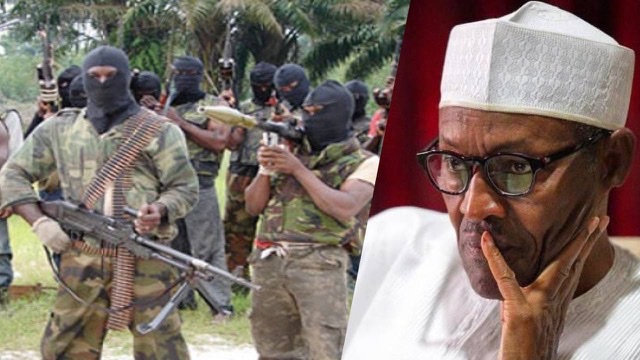 Ex-militants under the Phase III of the Presidential Amnesty Programme (PAP) in Delta State have demanded for their guns and other weapons which they surrendered to the Federal Government in 2011.

The ex-militants are making the demand as a result of alleged failure of the Buhari led FG to fulfill it’s own part of the bargain for the monthly payment of N65,000.00 stipend to each member of the group.

Coordinator of the Phase III Ex-Agitators in Delta State, Gen. Marshal Atake, alleged that they were being excluded, continuously, from the monthly stipends by the Amnesty Office.

Atake said if the government cannot fulfill it’s obligation, their guns should be released to them.

He lamented that since the 2011 documentation of the Phase III at JTF Headquarters Sector 1, Effurun Barracks, Warri, the Amnesty Office has allegedly refused to implement the payment of the N65,000.00 monthly, adding that their colleagues in other states were being paid.

“We wrote severally to the Amnesty Office when Kingsley Kuku was there and had also written under Col. Milland Dixon Dikio as the administrator of the Presidential Amnesty Programme, but no success.

“We are calling on President Muhammadu Buhari to give Dikio a marching order to include the Phase III ex-agitators in the monthly payment and all the programmes that other members are benefitting from,” he said.

Other ex-agitators including Gen. Daniel Egole and Gen. Williams Emoghene in their separate statements, insisted on being paid their monthly stipends.

They said they were disarmed 11 years ago, and have not been paid a dime, asking why the discrimination when it was the same gun others dropped that they also dropped, urging the amnesty boss, Col Dikio to pay them their stipends.

MEANWHILE, The Interim Administrator, Presidential Amnesty Programme, PAP, Col. Milland Dixon Dikio, retd, has earlier said that he lacks the mandate to include new beneficiaries into the amnesty scheme.

In a statement earlier issued by Dikio’s Special Adviser on Media, Neotaobase Egbe, said the amnesty boss spoke when he appeared before the Senate Committee on Ethics, Privileges and Public Petitions in Abuja to defend a petition against PAP by a former agitator, High Chief Sobomabo Jackrich, popularly known as Egberipapa.

Dikio clarified that only President Muhammadu Buhari has the exclusive power to admit new people into the programme.

Jackrich in his petition complained that his boys were excluded from the scheme despite surrendering their arms in line with the conditions contained in the amnesty proclamation made by late President Umaru Yar’Adua.

Dikio, who honoured the invitation of the committee chaired by Senator Ayo Akinyelure, said though he was aware of the matter when he took over the leadership of PAP, such function was beyond his mandate.

His words: “I lack the power to admit anyone to the scheme because such power can only be exercised by the President. As a man under authority, my mandate as Interim Administrator of PAP is to cater for 30,000 ex-agitators, who had been duly registered and captured as beneficiaries of the scheme.”

Speaking after the panel sitting, Dikio dismissed the rumoured plans to enlist more beneficiaries to the scheme and warned persons behind it to desist from spreading falsehood.

He stressed that the programme was focused on 30,000 beneficiaries, who were yet to be trained by PAP and warned people against the antics of scammers.

Speaking further, he said: “Our focus and priority at the moment as far as the amnesty programme is concerned is to make sure that the 30,000 beneficiaries under our watch are well trained and empowered to become employers of labour and net contributors to the economic prosperity of the Niger Delta.

“That’s why it is important to warn youths in the region to totally discountenance any rumour asking or requesting them to fill forms to be enlisted as new beneficiaries of the amnesty programme. It’s a scam pure and simple. They shouldn’t fall for it.”