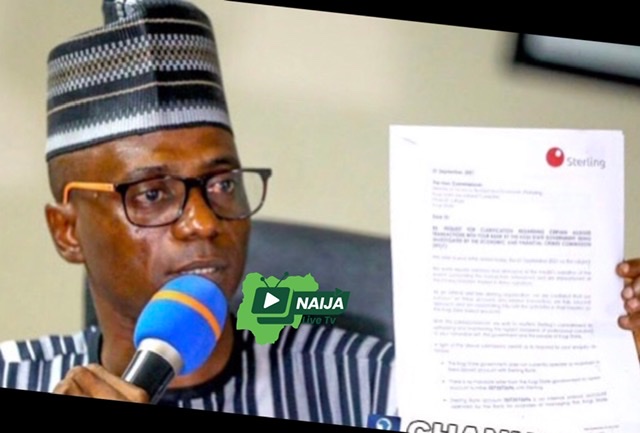 The Kogi government says the Economic and Financial Crimes Commission (EFCC) is “misleading” Nigerians on the “recovery” of N19.3 billion from an account allegedly belonging to the state.

Over the past months, the anti-graft agency and the Kogi government have been at loggerheads over allegations that the state runs an account in Sterling Bank containing N20 million bailout loan.

The EFCC had alleged that there were suspicious fraudulent activities related to the account.

In response to the development, the state government asked the EFCC to publicise the report of its investigations on the alleged fraud involving the N20 billion bailout fund.

In October, the EFCC withdrew its suit seeking the forfeiture of the funds, saying it would enable the management of Sterling Bank transfer the money to the Central Bank of Nigeria (CBN)

On Friday, the EFCC, in a statement, said the CBN had received the sum of N19.3 billion recovered from the bailout account, which the commission identified as that of the Kogi government and domiciled in Sterling Bank.

The anti-graft agency said the development has put to rest the “campaign of misinformation and unconscionable denials” of the state that no fund was recovered from the bailout account.

Speaking on the development in a statement by Kingsley Fanwo, Kogi commissioner for information, the state government insisted that it doesn’t have such an account with Sterling Bank.

“The Kogi state government has described as laughable the Economic and Financial Crimes Commission’s attempt to desperately wriggle out of a bad case with another mischief aimed, again, at misleading Nigerians,” the statement reads.

“Quoting a letter signed by the Central Bank of Nigeria, which has not said anything different from what has been said so far on the controversial N20bn bail-out fund, the EFCC finally exposed the fact that it had been pursuing a political agenda all along, as we prepare a comprehensive response to the latest of the desperate moves by the commission to save its face in view of its obvious goof and unethical conduct in the matter in dispute.

“The press statement by the commission is a malicious attempt to rope the state into a matter that ordinarily has nothing to do with our dear state.

“We maintain the unassailable truth that the Kogi state government did not operate such an account with the bank as affirmed in a letter by the bank.

“We sympathise with the EFCC as it has been a herculean task to cover the initial misinformation and deliberate deceit by the commission.

“The Kogi state government will react to this comprehensively as our media and legal teams are currently studying the ill-fated press statement by the EFCC.”