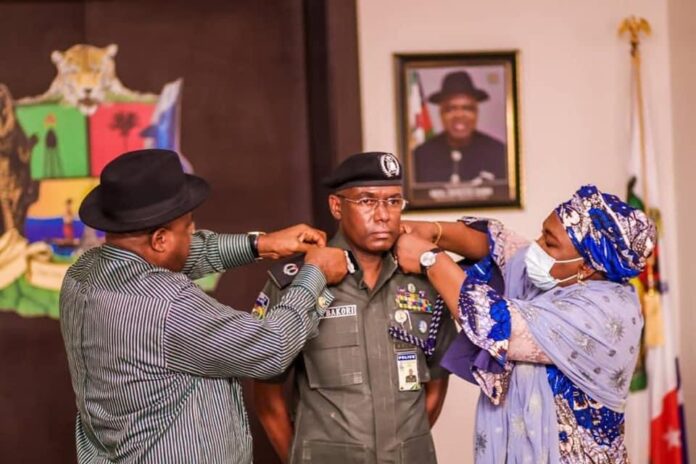 DCP Ibrahim Bakori was a one time escort Commander to under President Olusegun Obasanjo era, former ADC to Speaker house of Representatives and No. 24 Police Mobile Force, Presidential Escort, Abuja.

Diri, during the decoration ceremony, urged the new Commissioner of Police in the state, Echeng Eworo Echeng to among other things check the rate of kidnapping in Yenagoa and other parts of the state, stressing that the ugly trend can no longer be tolerated.

Diri, who described the coming of the new commissioner as a blessing to the state given his profile and track record of achievement.

Stating that Bayelsa had a policy of zero-tolerance to crime and criminality, he assured the new police boss of his administration’s readiness to partner with the force to rid the state of crime.

The state helmsman urged people of the state to cooperate with the police to make it safe, saying security was a collective responsibility.

His words: “We prayed to have a worthy successor to the retired CP of Bayelsa State and from my findings we are happy to have you. You have the required character to serve. Your appointment is our prayer answered and we welcome you. Be assured that you will work in an environment of conviviality and friendliness.

“As a government, we have said it that criminality does not discriminate. Our common resolve is to ensure that Bayelsa State is free of criminality and the policy of this government is zero tolerance to crime and criminality.

“We want the citizens of this state and residents to sleep with their two eyes closed. Listening to you, clearly you are not a new comer. You have been here before and your record showed you are well experienced and have the training that the state would benefit from. I assure you that as a government we would relate and work with you at all times so that Bayelsa would be crime free.”

Earlier, CP Echeng stated that his visit to the governor was in recognition of his office as the Chief Security Officer of the state and to seek his support.

While stating his zero tolerance for corruption in line with the policy direction of the Inspector General of Police, he said the police would work closely with the government to make the state safe.