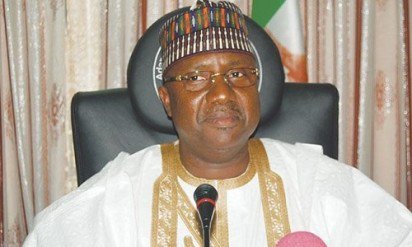 #NaijaLiveTv
Yola – Gov. Muhammadu Bindow of Adamawa has declared a three-day mourning period in the state over the death of his Chief of Staff, Alhaji Abdurrahman Abba-Jimeta.

The State Commissioner for Information and Strategy, Malam Ahmad Sajoh, said that Abba-Jimeta passed away in the early hours of Monday after a brief illness in Mecca, Saudi Arabia, where he went to perform the lesser Hajj (Umrah).
Sajoh said the three-day mourning commenced from Monday.

“The governor calls on the people of the state to pray for the peaceful repose of the soul of the late Chief of Staff,’’ the commissioner said in a statement.

According to him, the state government calls on workers to be more committed to the programmes and development of the state in remembrance of what the late Abba-Jimeta stood for in his over three decades of public life.

Sajoh noted that the 59-year old Abba-Jimeta, who was buried in Mecca, was a former teacher; a Director of the defunct MAMSER; and a commissioner for information during Gov. Boni Haruna and Gov. Murtala Nyako’s administrations.

The commissioner described the deceased as an orator and crowd-puller, adding that Abba-Jimeta was also the Director, Gov. Bindow’s Campaign Organisation. (NAN)