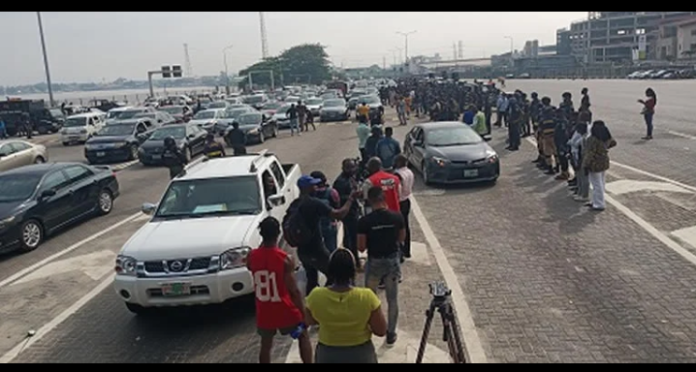 Earlier, operatives of the Lagos State Police Command arrested two protesters.One of those arrested claimed to be a journalist while the other was seen carrying a placard.About 30 police trucks and armed personnel are currently at the tollgate to enforce a ban on protests issued by the police command.

The #EndSARS protests which were held in October 2020 were against the activities of the now-disbanded Special Anti-Robbery Squad, a unit of the Nigeria Police Force which was accused of police brutality.

The epicentre of the protests was the Lekki tollgate in Lagos where many youths gathered day and night to air their grievances against police brutality and bad governance.

They were dispersed from the location by gun-wielding soldiers on October 20, 2020, an action which some quarters believe led to the loss of lives.This was followed by the destruction of private and public properties by hoodlums in Lagos, an incident that informed the latest warning issued by the police in the state.

The Lagos State Police Command had said no form of street protest in commemoration of the #EndSARS anniversary would be tolerated in any part of the state.

The state Police Public Relations Officer, CSP Adekunle Ajisebutu, in a statement on Tuesday, dispelled the rumour circulating on social media that the police had agreed to allow street demonstrations to commemorate the #EndSARS protest anniversary scheduled to hold today (Wednesday).He said the command would only allow indoor and virtual events in commemoration of the anniversary.Ajisebutu said,

READ ALSO: Ijaw youths give FG one-month ultimatum to set up NDDC board …Vow to lockdown region in protest worse than #EndSARS

“The attention of the Lagos State Police Command has been drawn to a post being circulated on social media insinuating that the police in Lagos have agreed to allow street protests in commemoration of the one-year #EndSARS anniversary on October 20, 2021.

“On the contrary, the police will only allow indoor and virtual events in commemoration of the #EndSARS anniversary and will provide adequate security at the venue(s) if known.

This is in recognition of the rights of every Nigerian to express his or her interest.“We wish we could permit such street protests.

However, intelligence at our disposal has revealed plans by some faceless groups or individuals to stage an anti-#EndSARS anniversary protest in the state on the same day.

“In view of the conflicting interest between the pro and anti-#EndSARS anniversary groups and threat to cause mayhem, the command once again warns both groups against any form of street protest between now and October 20, 2021 and beyond.”