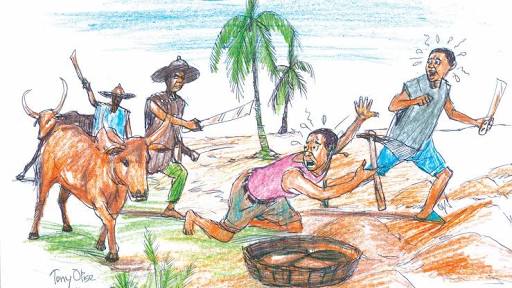 A farmer from Ubiaja community in Esan West Local Government Area of Edo State identified as Godwin Eromosele has fled his hometown after recieving a death threat from some herdsmen he had confrontation with in his farm two weeks ago.

A community source who revealed this in Yenagoa, Bayelsa State, said after recieving the death threat that was handed down via telephone call, Godwin confided in him that he is leaving and never to return because herdsmen are deardevils that have become above the law in the country

According to our source, on the day the said confrontation resulted to the threat, “Godwin was working on his farm when the herdsmen took their cattles into his farm destroying crops.

“When he questioned the herdsmen, numbering two, they ignored him and went about their business as if nobody talked to them.

Angered by the damage and manner they snubbed him he damanded they leave his farmland or he would use force to push them out.

“It was at that point the whole thing turned into a heated argument and eventually ended up in a fight that didn’t favour the cattle rearers.

“When he came home, he reported the matter to us but we tought that was the end until the death threat came two weeks after.”

He further explained that the community now live in fear that the said herdsmen may carry out their threat.

“I tried to convince him to stay but he recounted how sometime in January 2018, a farmer known as Jerome Arowolo from Ojah community in Akoko Edo LGA lost his right hand to an attack by herdsmen.

” He said according to reports, the farmer was attacked at his farm after he refused to give food to five herdsmen who he encountered on his farm. And that he fears that they may kill him in the same manner.”

It could be recalled that in March 2018, five persons, including a first year student of the Ambrose Alli University Ekpoma, Edo S‎tate, Collins Ojierakhi, were reportedly killed by herdsmen in Ugboha, Esan South East Local and Odiguete Ovia North East Local Government Areas of Edo state.

We have not ceded any land in any part of the state for cattle ranching – Obaseki.