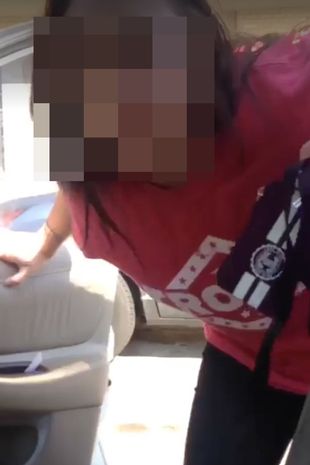 There was a mild drama in a Popular Hotel in Yenagoa, the Bayelsa State Capital, when the wife of a prominent politician was caught in the act with her lesbian lover

According to sources, the marriage between the popular Bayelsa Politician and his lovely wife seem to be in trouble due to her obsession in lesbianism

NAIJA LIVE TV gathered that, the popular Politician [Name Withheld] became angry when he was informed recently that his lovely wife is indulge in acts of lesbianism.

It was further learnt that when he confronted her over the matter earlier, she denied the allegations.

It was gathered that the husband who is well connected in Bayelsa had made up his mind to send some of his relatives to secretly monitor her when he discovered that she has been spending lavishly on women who are allegedly well known lesbians in Bayelsa State.

Luck ran out of her yesterday when she was trailed to the hotel where she was caught in the act by her husband with the help of investigation by relatives.

An Eyewitness who do not want his name published, told NAIJA LIVE TV that her husband [Name Withheld] who is a former Special Adviser to the Governor of Bayelsa State, was said to have been suspecting his wife of cheating in there marriage and complained to one of his close relatives who monitored her movements to the hotel and called him to confirm the claims.

The Source said, the drama occurred yesterday in a Popular Hotel [NAME WITHHELD] owned by a Prominent Nigerian Politician in Yenagoa, where the husband trailed her to, catching his wife in the act with another lady.

Another Source told NAIJA LIVE TV that wives of senior politicians in Bayelsa are currently indulged in lesbianism due to the inability of their husbands to satisfy them sexually, and that some of them were already involved in lesbianism before they got married.