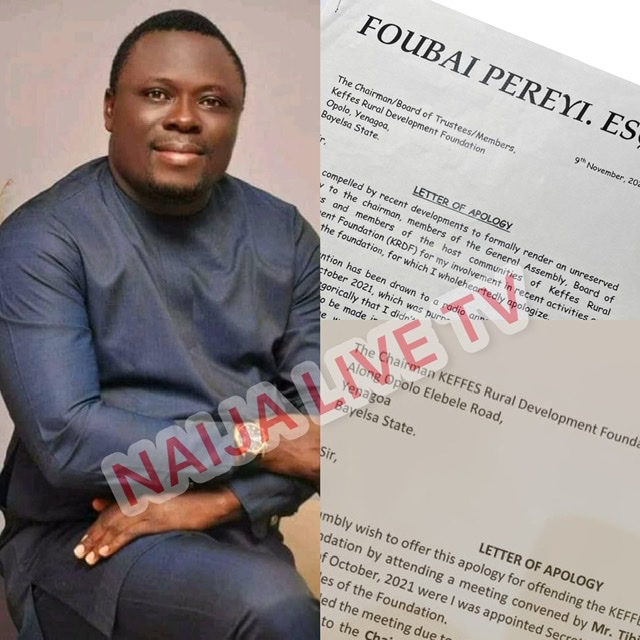 Foubai Pereyi Esq, Counsel to the six persons suspended by the leadership of eight host communities of Chevron Nigeria limited exploration activities in Southern Ijaw and Brass Local Government areas of Bayelsa State under the KEFFES Rural Development foundation has withdrawn his services and tendered an unreserved apology over his involvement in the lingering crisis within the Organization.

Pereyi, in his letter of withdrawal and apology to the leadership of the KEFFES Rural Development Foundation and dated 9th of November, 2021 claimed he was wrongly briefed and tendered an unreserved apology to the General assembly of the Board of Trustee and Chairman of KEFFES RDF.

Pereyi also denied any involvement in the issuance of a press statement over the lingering crisis within the foundation.

Also a member of the representing Fishtown community, Mr Noel Ikonikomo, who was among the six suspended and appointed as secretary of the parallel exco of Mr Tibiebi Amadein, has tendered an apologies to be readmitted into the organisation.

According to Ikonikomo, “ Please pardon me for this mistake as to err is human and to forgive is divine. I wish to appeal to all the members of KEFFES RDF that my suspension be reviewed. Kindly pardon me and reinstate my benefits.”

It would be recalled that Six members of the KEFFES RDF were a fortnight ago suspended over allege wrongful interpretation of the order from the State High Court and attempted to change leadership through the back door.

Comrade Tibiebi Woinemi Amadein had in suit against the chairmanship position of Mathew Selepri at the state high court, Oporoma division and the court ordered that the Keffes Rural Development Foundation (KRDF) conduct another election and a stay of execution motion was filed before the Court of Appeal sitting in Port Harcourt, Rivers State.

It was gathered that the High Court in its ruling did not declare the claimant, Tibiebi Woinemi Amadein as Chairman or executive of the KRDF. And allegedly in defiance to the ruling of the court had written a letter to Chevron Oil limited claiming victory and setting up a parallel executive of the foundation.

But the members of the Foundation, after an emergency meeting in Yenagoa on Saturday, said the action of Messrs Tibiebi Woinemi Amadein, Kofa Murphy Daniel, Noel Ikonikomo, Christopher longlife, Mrs Amina James and Ebitare Joseph consisted of gross misconduct and acted on impunity which has caused serious disaffection and negative publicity on the body. They accordingly suspended their membership of the keffes foundation without benefit indefinitely.

The Emergency meeting, which has in attendance, twenty-six out of the thirty-two members of keffes RDF and presided over by the Chairman, Sele-epri Matthew deliberated on the legal leadership of KEFFES, the implication of the judgement and the action of the Tibi-ebi led the group.

At the end of the meeting, the members of the foundation resolved unanimously that the court judgement on the suit filed by the claimant is clear and was specific to the office of the chairman, “that the judgment is a decision of the first court of instance which is subject to an appeal and therefore cannot be enforced since the defendant has already filed an appeal and a stay of execution of the judgment of the lower court.”

In the statement issued by KEFFES foundation and signed by the secretary, Ngozi Amakiri and read by an ex-officio member, Chief Christopher Tudu, said: “ the court at no time or place declare Tibiebi Amadein the eventual winner as this was never part of the issues or prayers in the process filled by the claimant.”

“The leadership of the house frowns at the following members Messr Zilpah Osaisai, Decca perekunakuna and Ebi think Williams who ignorantly worked with the claimant and attempted an unlawful change of leadership”.

“That the said three members of Keffes who openly apologized to the house and asked for forgiveness be pardoned accordingly. That the house by way of a motion after deliberating on the evil and unpatriotic actions of Messrs Tibiebi made, Kofa Murphy Daniel, Noel Ikonikomo, Christopher Longlife, Amina James and Ebitare Joseph his resolved that given the impunity of their actions which has caused serious disaffection and negative publicity on the body, be accordingly suspended from the membership of keffes foundation without benefit indefinitely. “

“That the house unanimously passed a VOTE OF CONFIDENCE on the Sele-Epri led government and assured them of their absolute unflinching support”.