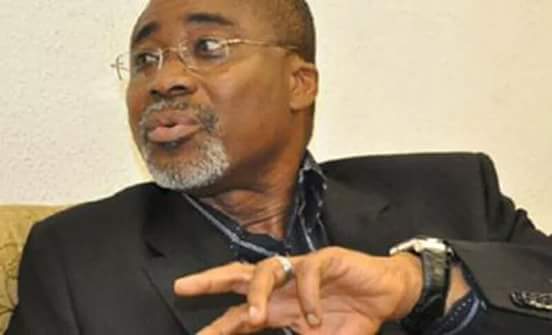 A senator, Enyinnaya Abaribe (Abia-PDP), has asked President Muhammadu Buhari to declare December 31 as Democracy Destruction Day to mark the coup he led to end Nigeria’s Second Republic in 1983.

Mr Abaribe made this contribution to the dissent of All Progressives Congress senators on Thursday.
Then a Major-General, Mr Buhari on December 31, 1983 led by a group of senior army officers to overthrow the democratically elected government of President Shehu Shagari. He was appointed Head of State by the conspirators.
Now a democratically elected president, Mr Buhari on June 6 directed that effective 2019, Nigeria’s Democracy Day, marked every May 29 for the past 18 years, be shifted to June 12 to honour Moshood Abiola, the winner of the 1993 presidential election. Mr Abiola was never ssworn in as president. He was instead detained by the military and died in prison five years later.
Mr Abaribe said December 31, 1983 is significant enough to mark the day democracy was destroyed in Nigeria. He urged the president to declare the date just as he did June 12.
First, he joined his colleagues in commending Mr Buhari on the move.
“I support what Senator Olujimi and also what the Deputy Senate President had said, insisting that there may have to be an amendment of the constitution.
“I also want to add that it would also be necessary for the Executive to quickly bring to the National Assembly, an amendment to the Honours Act which states that there cannot be posthumous award. Now that they have jumped the gun to do posthumous award, it would be necessary for us to quickly amend that act.
“Finally, I want to also propose another day since we are now moving in the right direction, saying that democracy is needed, I want to propose that we also designate 31st December as Democracy Destruction Day because that was the day that this same president did a coup.”

Mr Abaribe was cut short by his colleague, Barau Jibrin (Kano-APC), who raised a point of order to call the attention of the Senate to a derailment from issue being discussed.
The point of order was sustained.

“Sen. Abaribe Is An Ethnic Bigot and An Elder for Nothing” – Igbokwe to the Nigerian No.1 Senator for wearing the Dot-Nation T-shirt!