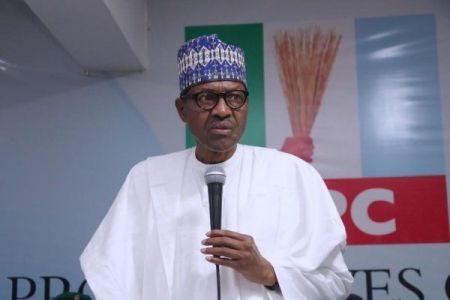 Although this is the third time the President will be speaking in this direction this year. The President specifically said he was working very hard to fill the vacuum created in the cabinet by the Minister of Mines and Steel Development, Kayode Fayemi who recent left to contest Ekiti State gubernatorial election coming up July 14, 2018.

The President, who was speaking when he received Muslim leaders who paid him the traditional Sallah homage at the Presidential Villa, Abuja on Friday, singled out Fayemi for his contributions to his cabinet, saying that “we are going to work very hard to fill his space in the executive council so that we keep on exploiting more and more of our solid minerals and less politicizing of our petroleum resources”

The President had noted that the country is blessed on human and material resources, and used the occasion to eulogize former minister of mines and steel, Kayode Fayemi, who he said “has been a very hardworking minister, because the ministry he was leading was neglected with the overbearing economic relevance of oil”

“But from the days of mining of tin, columbite, coal and so on, you know this country is blessed. Throughout the country, we have solid minerals and I am hoping that Fayemi will succeed to lead again his state. I believe he is a very hardworking person, very patriotic but Nigerian politics is virtually unpredictable”

President Muhammadu Buhari again lampooned Nigeria’s past leaders for wasting the nation’s resources, even as he advised Nigerians to shun “ sectionalism and individualism”

“It’s on record that we were producing 2.2 million barrels per day on the average, at the cost of $100 per barrel. It went up to $143 per barrel and then I think it stabilized between $80 and $90, Nigeria has never received so much money”

In an apparent reference to the economic recession of 2016, the President said the nation was lucky to come out of the challenges adding that “and we thank God that we have survived the crisis in no time”

Recalling his sojourn to the Presidency, Buhari said “It is amazing that we are here because we tried four times, we ended up three times at the Supreme Court and it is no joke.

“I have suffered for this democracy just like I suffered in the Military, I walked from the Royal border to the virtually on foot, because every culvert and bridge were blown up, so we had to walk and carry our luggage,” he said

“ I think we have invested so much in this country and we will continue to pray that we stay together and let us develop the necessary confidence, work together as a people, this country is great, let us work together so that we can save a lot more and exploit more of the resources that were abandoned so many years ago”

“I’m very grateful to the ministers and church leadership that came to say happy Eid-Filtri to those of us that have been fasting.

He disclosed how he was asked by people closed to him to drop the fasting on health grounds, but according to him, “ I refused because I know the value in fasting, I cannot miss it once I can do it.

Last year I didn’t because I was on health vacation but this year, I have done it and I thank God because it has helped me to be much more healthier to give me the time that I need to attend to national issues”

“Please in your constituencies, emphasize what I said about 30 years ago, we don’t have another country except Nigeria, we may as well remain here and salvage it together, there is nothing else we can do”

“Even those that had gone out are now trying to come back because they are not wanted out there. I wish all the resources they had they had deployed it here it would have been much better. So thank you very much and please try to persuade your constituencies to work much harder away from individualism and sectionalism.” (BusinessDay