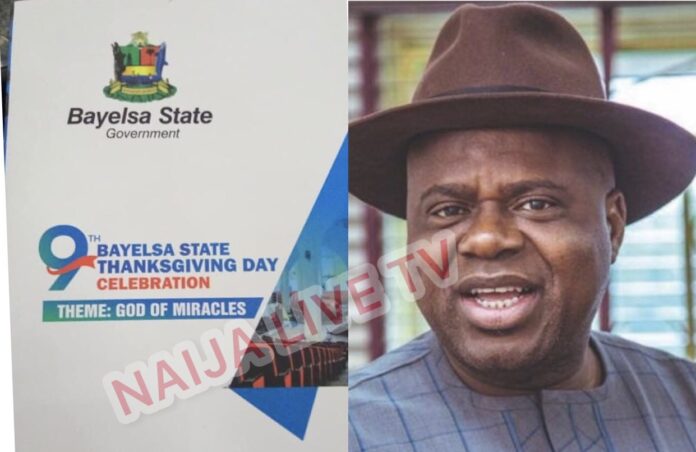 Popular Bayelsa Indeginous Gospel artistes has threatened to drag Bayelsa state Government under the leadership of Sen. Douye Diri to court over what the Christian groups describe as non patronage, Negligence of Indigenous artistes for the Bayelsa Annual thanksgiving slated for November 2nd

The group stated this in a joint statement Signed by the National President of the Ijaw Gospel Musician Association of Nigeria (IGMAN), Mr. Money Jacob and the Chairperson of Federation of Gospel Music Ministers of Nigeria (FOGMMON) Bayelsa State Chapter, Madam Blessing Okusiriki for on behalf of all Bayelsa gospel artistes stated that the resolve of the groups Is to match words with action to resist Gov’t by using every legal means within their purview any further subjugation against Indigenous Gospel artistes by the Gov’t in power

The angry ijaw Singers further condemn in the harshest term the penchant of successive governments especially the current regime of Sen. Douye Diri in celebrating foreign artistes as against patronage of Bayelsa indigenous artistes.

The Statement read;
“After an emergency meeting of critical stakeholders, elders and the gospel music community in Bayelsa state, we hereby condemn in the strongest terms the age old neglect, sidelining, utter disregard of Ijaw Gospel artistes of Bayelsa origin or other ijaws in diaspora in Bayelsa state Government events especially statutory events like the state thanksgiving service being organized at the moment”

“We condemn in the harshest term, the penchant of successive governments especially the current regime of Gov DOUYE Diri in celebrating foreign artistes as against patronage of Bayelsa indigenous artistes”

“How can an homogenous ijaw state plan for a statewide thanksgiving event without an ijaw element in an activity that is supposed to capture the mood of the indigenes in the direction of giving thanks to God? Why would Bayelsa state give thanks without a representative of the linguistic cadence and configuration showcasing the indigenous image, colour and tongue of its people in its effort to appreciate divinity?”

“The ijaw gospel artistes condemn the deliberate subjugation, pulverization and humiliation of the ijaw Gospel artistes in preference for artistes from any other part of the country or abroad as reflected in the flyers and billboard publicizing the forthcoming event.”

“While we extend our love to our fellow Gospel artiste and Icon, Sinach, it’s important to emphasis that we are not averse to any foreign artistes being engaged to thank God with us in our State. But our grouse is in the total blackout on anything Bayelsa in the images being sent out nationwide vis-a-vis the upcoming thanks giving event.”

“More so, how do u explain the consistent unwillingness and deliberate refusal of the State Government to spend anything up to a million for an ijaw artiste, while relishing in its magnanimity of spending several millions of Naira when it comes to artistes outside our shores? So our collective patrimony can only Carter for outsiders while the local artistes continue to wallow in the cesspit of neglect and abandonment? This is abominable!!

“We want to ask the Government to quickly fix the error now and set the stage for a more deliberate robust and conscientious engagement with the local gospel music community before it becomes intractable.”

“We are asking the Bayelsa State Government to take very serious our emphasis on promoting local content so the young ones can grow while we build our state economy instead of sending millions outside.”

“That henceforth, leaders of IGMAN and FOGMMON must be involved in the planning committee.”

“In the light of the statement above, we are corraborating the effort of Pst Bannerman to throw weight on this issue.”

“By this joint statement, we are stating our resolve to match our words with action to resist using every legal means within our purview any further subjugation of the Indeginous Gospel artistes.”

MEANWHILE, A foremost Bayelsa state indigenous gospel artiste, Pastor Bannerman Embiowei has faulted the state government for hiring musicians from outside the state with millions of naira to perform during the annual Thanksgiving Day to the neglect of indigenous artistes.

The immediate past government led by former governor Seriake Dickson had signed into law a Bill from the state House of Assembly tagged “Bayelsa Thanksgiving Day” which is being marked every November 2.

Bannerman, who is the first gospel artiste to sing Christian song in lzon language, lamented that the state government has decided to opt for foreign singers who are highly paid with Bayelsa tax payers money only to come and be replaying his own composed songs on stage.

Bannerman expressed dismay that the act of hiring non-Bayelsans as against indigenous artistes who can equally perform same role is aimed at empowering the outsiders and impoverishing the indigenes who are supposed to be encouraged by the state government to grow.

“How many state governments do come to invite our music ministers to their own programs? She (Sinach) will not sing more than 30 minutes and already some millions of naira have been paid into her account and you people think God is happy?

“If I would have had my way, the indigenous gospel musicians would have boycotted the Thanksgiving.

“N2,000 naira will be given to pastors so no one will talk. God is the God of tribe and tongue, Sinach will sing with English, Abraham will now sing the ijaw songs ,even my own songs and be given N200,000 which he will share among his boys.

“This is wickedness. Even God will not be happy our money is better enjoyed by outsiders. Sinach you are welcome to Bayelsa, the father Christmas of all lands where talents are not encouraged.

“If possible, they should ask people that they do invite to stop singing my songs, you can not be dancing to the tune of my song, meanwhile you do not want to see me who own the song. And His Excellency is allowing this?.

“That even when the gospel musicians in the state are being invited, they give them peanuts. This act, Evangelist Bannerman, says is an act of wickedness.

“That even God, instructed His disciples to first go or consider Jerusalem before any other part. Bayelsa state is just a civil servant state, with no other multinational companies, so how does the government want the indigenous gospel music ministers to survive?,” he queried.

“As a father of gospel music in the state, I beg before I eat, pay rents, and children school fees, so how will the government want the young ones to imbibe any skill?

“Now the state Thanksgiving, it was Sinach that was invited. I wasn’t against Sinach being invited and paid millions of naira, but that same gesture should be extended to the indigenous gospel music ministers.

“When they invite us they give us peanuts and they still expect us to excel. That God is not also happy with the way the indigenous gospel music ministers are being neglected,” he added.