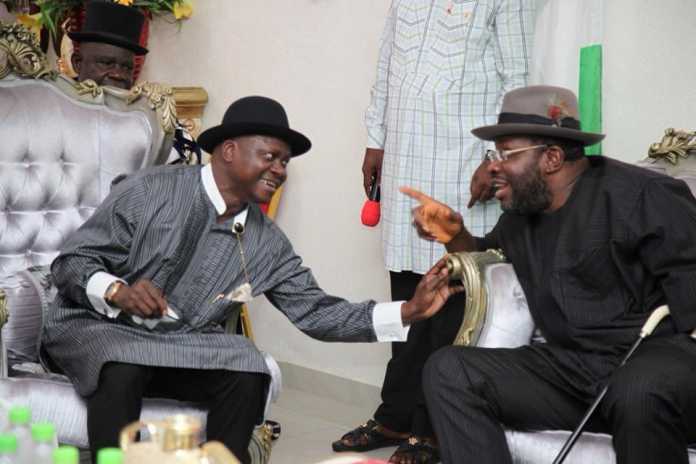 The Governor said that Alaibe has been circulating a cynically manipulated version of addresses he delivered during political meetings and other fora with the intent to blackmail him for assumed political benefits.

A statement by the Special Adviser, Media Relations, Mr. Fidelis Soriwei quoted the governor as saying that the former NDDC was resorting to blackmail out of desperation to win the gubernatorial primaries of the PDP at all costs.

The Governor said that it was absurd that Alaibe would go to the extent of manipulating audio recordings of his speeches for distribution to respected Nigerians with the intent to blackmail him.

He maintained that he regards all the aspirants including Alaibe as his brothers and friends and would not do anything to destroy any one of them.

However, Gov Dickson noted that Alaibe was at liberty to play the same game that he has been playing against all the governors of the state.

He said that Nigerians and leaders of the PDP should expect more of such blackmail as the state moved closer to the September 3, 2019 party primaries.

He enjoined Alaibe to focus his attention on the Bayelsa people especially the delegates who are empowered by law to decide who should be the gubernatorial candidate of the PDP.

Gov Dickson said acceptability and popularity rather political desperation and manipulative action would make one of the 21 gubernatorial aspirants under the PDP to emerge winner at the forthcoming primaries.

The Governor said that the surreptitious bid to mudsling was unnecessary as only one of the 21 aspirants most of who are qualified to govern the state would fly the party’s flag.

The Governor maintained that while he remained a major stakeholder in the gubernatorial contest in Bayelsa as the leader of the party, it was his own right to decide who to support and vote for.

He said, “It has come to the attention of the government that the former Managing Director òf the Niger Delta Development Commission, Chief Timi Alaibe, has been spreading manipulated audio recordings of Governor Dickson’s public utterance during meetings.

“It is curious that Alaibe would rather dissipate energy to the propagation of mischief rather than focusing attention on his gubernatorial campaigns.

“We wish to reiterate for the umpteenth time that the Governor as a major stakeholder in the issue of the governorship primaries is entitled to his own political views and decisions. That does not preclude any politician with genuine interest from testing his popularity with the delegates.

“It is important to stress also that the Governor’s decision not to reward disloyalty with the candidacy of the party is an informed decision of conviction.

“Alaibe would do well to focus on the campaigns to actualize his aspiration rather than the spreading of a campaign of calumny against a man whose name is not on the ballot. “

“Nigerians and leaders of the PDP should expect more of this blackmail as we move closer to the primaries.”