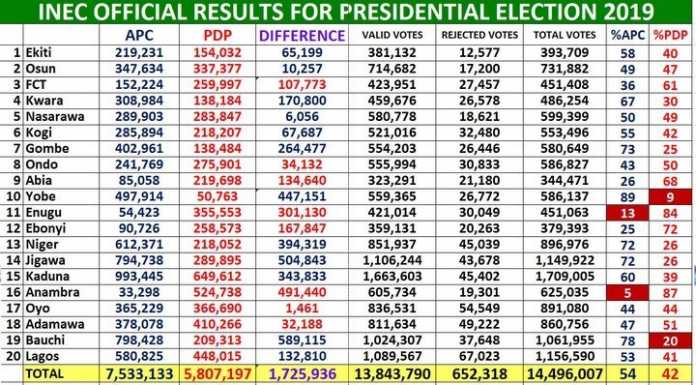 President Muhammadu Buhari and his All Progressives Congress, APC, have asked the Presidential Election Petition Tribunal, to expunge from its records over 28,000 result sheets of the February 23, 2019 election in 10 States, tendered by the Peoples Democratic Party, PDP, and its Candidate, Atiku Abubakar.

They also urged the Justice Mohammed Garba-led Tribunal of five Judges, to reject the testimony of the Petitioners’ 40th, 59th and 60th witnesses.

Recall, that Atiku’s Spokesperson, Segun Showunmi, was the 40th witness; David Njorga from Kenya, who was described by the Petitioners as their “Expert witness”, was the PW 59; while Joseph Gbenga, a Data Analyst was the PW 60.

Buhari and his party, also asked the Tribunal to reject a separate set of 33 documents, which included the Certified True Copies of Form CF001 (personal particulars), submitted by Buhari to the Independent National Electoral Commission, INEC, as the Presidential Candidate of his party, other INEC documents, and some newspaper reports.

Among the 28,428 documents, whose admissibility were being challenged by Buhari and the APC, are 28,395 Certified True Copies of Polling Unit, Local Government, Ward and State result sheets of 10 States.

Buhari and the APC’s prayers urging the Tribunal not to act on the documents, are contained in their separate objections to the admissibility of the Petitioners’ documents earlier admitted conditionally as exhibits by the Tribunal.

Copies of the filings by the 2nd and 3rd Respondents (Buhari and APC), were filed alongside their separate final addresses, in which they urged the Tribunal to dismiss Atiku’s petition against Buhari, for lacking in merit.

The Tribunal had fixed August 21, for parties to present their closing arguments in respect of the petition challenging the victory of Buhari and the APC, at the February 23, 2019 poll.

APC’s Lawyer, Lateef Fagbemi, urged the Tribunal to “expunge” the documents from the record of the proceedings, on the grounds that they were “wrongly admitted in evidence”, when they “are legally inadmissible”.

He contended that while some of them “are documentary hearsay evidence that should not have been admitted by the honourable court in the first place”, others were inadmissible on the grounds that they were tendered from the bar, despite being disputed by the APC.

On the evidence of the Petitioners’ witnesses’ numbers 40, 59 and 60, Buhari’s Lawyer, Chief Wole Olanipekun, said that their testimonies were in violation of the March 6, 2019, order of the Tribunal, which dismissed the Petitioners’ request to be granted access to an alleged server, in which they claimed INEC stored the authentic results of the last Presidential election.

Showunmi (PW40), had tendered some video evidence to prove the Petitioners’ case of the existence of the server.

Olanipekun faulted the evidence of the witnesses, which he argued emerged “in express violation of a subsisting order of court, same germinates in stark abuse of the process of this honourable court”.

JUST IN: No more protests in Lagos – Police...

FROM WHAT I’M SEEING, the dark clouds have gathered!...