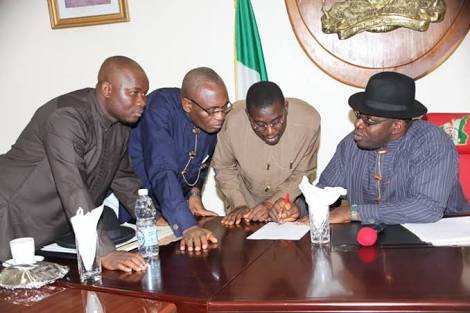 The Bayelsa State House of Assembly has in the last three years of the 5th Assembly passed into law thirty seven bills and 27 motions with others at different stages of legislation.

Addressing members of the House of Assembly during plenary, the Speaker Rt. Hon. Konbowei Friday Benson commended members for their commitment to making laws that will create the enabling environment for development and platforms for Bayelsans to express their full potentials.

According to a statement issued and signed by the Media Assistant to the Bayelsa Assembly Speaker, Mr. Aotendeike Boloigha,the 37 Bill passed into law were part of the 48 executive and sponsored Bills received by members in three years.

According to Speaker Kombowei Benson, sessions; the commendable performance of the members of the State House of Assembly was due to resilience and doggedness,” an all inclusive leadership gave rise to teamwork that saw the passage of the 37 bills, this is in addition to 27 motions”.

Speaker Kombowei Benson however urged Chairmen of House Committees still working on bills to expedite action as the country is gradually moving closer to another electioneering season.

approach to finishing up strong.

On the cordial working relationship between the legislature and the executive, Dr. Konbowei Benson said owing to the legislative background of his Excellency Hon. Henry Seriake Dickson “it becomes easier as the Governor involves lawmaker even at the conception stage of nearly all executive bills thereby making the work stress free.”

He extolled the leadership style of Governor Seriake Dickson, describing him as a true democrat who has left no one in doubt in his commitment to transforming the state.

According to him, while some leaders look for every reason to deny the people of development and good life, Governor Dickson has in the face of slim resources continue to provide critical infrastructures; create opportunities for ideas to thrive and commend the Restoration Team.

While appreciating the staff of the State Assembly for their support, he enjoined Bayelsans to see the advancement of the state as a collective responsibility and do their bits to actualize the dreams of our founding fathers.

On behalf of members he pledged commitment to the course of making laws that will better the lots of the citizenry.