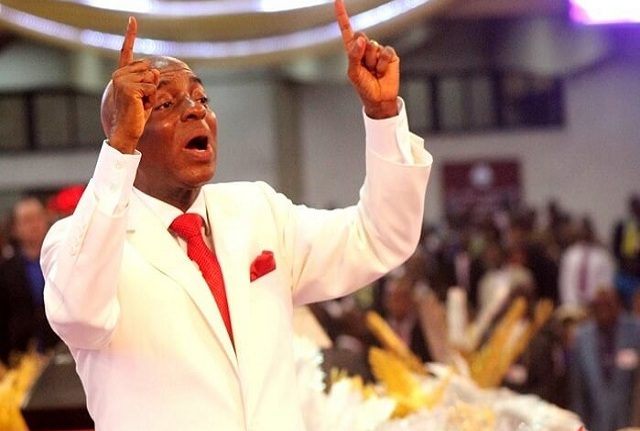 *Says ‘If you are not angry with what God is angry with, you are a bastard’!
*Roars, Nigeria is not a Fulani Republic…in Nigeria, cows are now more valuable than human lives.

Bishop Oyedepo has been speaking very passionately over the last few hours about the recent killings in several parts of Northern Nigeria. At last night’s evening service and this morning’s Hour of Prayer monitored by Church Gist at the Canaanland premises, he fired at the killers and their sponsors stating among other things that self defence is the right of every Nigerian.

We are on the verge of an outburst. This islamists are not relenting. And cursed be anyone from any quarters backing these wanton killings in Nigeria. Cursed be their roots and their generations. Not one herdsman has been accosted. Even when they were brutal enough to announce. They are poised for war but it will be in their own house. Everybody, whether in government or out of government, any demonic agent that’s after the destruction of this nation, the Lord God destroy them and their household.

Eleven villages were sacked in Plateau and by now since this their callous acts started, 52 villages are empty….when there is no war! Cursed be all forces behind this wanton killings!

If I be a man of God, let the fire of divine vengeance fall upon their head! Join in this warfare prayer, they won’t know where the war is coming from but they won’t wake up in the morning…,,and the Christians are their targets. In the name of Jesus, divine vengeance will target them and bring them down.

We are told from the News that ISIS have found their way to Nigeria. Whatever channel they came from, they will return from that same channel. The Angels of God will fight all the enemies of this nation. War shall not break out in Nigeria, it will break out in their own houses and take them off one by one. Curse these operators and their backers, curse them in the name of the Lord.

Nigeria is not a Fulani republic, let every devil be concerned. I will never become one. We didn’t sign a deal to live together as a Fulani Republic. Everybody that carries that thought and wants to implement it, the power of God will bring them down. Now in Nigeria, cows are more valuable than human lives. Authority claims they haven’t found anybody to claim responsibility when it was announced.
By the blood of Jesus, every manipulator behind this killing, the Lord brings them down!

Do you pray for witches or against witches?
Do you pray for armed robbers or against armed robbers?
Know what to pray against.
The present system must be prayed against…and God will bring them down.
Is cattle business government business?
If everybody whose shop is robbed goes about killing people, will it be taken?
Don’t let anybody take you for a ride. Self Defence is entrenched in the constitution. Give it what it takes to show that you’re not a dummy.
I am ordained a shepherd over a generation. I have a commitment to please God. Don’t let any devil take you for a ride.
Somebody announced that ‘we killed them and we will still kill them’ and they have not picked them up. What?!!!! Can’t you tell who is behind it?
Well, we are set. We are set. We will engage the full force of our spiritual authority.

This morning, the Bishop of one of the largest churches in Nigeria continued his onslaught.

‘I saw children sliced. The United Nations Youth have just written to ask for immediate intervention in this genocide. You don’t know the meaning?
Now wait a minute! All the security apparatus in Plateau, even the commissioner has just been removed and a Muslim put there. They are bent on genocide. They are bent on destruction of lives. Some fellows came and were cursing Elisha. He cursed them in the name of the Lord and two she bears came out of the wood and destroyed them. Lord destroy the destroyers. Trouble these troublers, let their hiding places be unveiled. Let your judgement catch up with them.
Let your curse locate them.
We occupy a strategic position in the kingdom in this nation. Let the Almighty God destroy the destroyers, destroy their household, destroy their generation. Let them be out of existence. Remove their remembrance from the earth. In the name of Jesus.
Curse them in the spirit.
The GOC is Muslim. The new Commissioner of Police posted yesterday is Muslim. Deputy Commissioner of Police in charge of administration is Muslim, Deputy Commissioner of Police in charge of State C.I.D is Muslim. They are bent! These demonic devilish people are bent. Now in the name of Jesus, the curse of the Lord catches up with them. We are not strangers in Nigeria. You are strangers! You don’t dare a people like this! Father,honour the words of your prophet and let judgement catch up with them. Let their roots dry up. Let the blood of these innocent children, pregnant women, let the blood of these innocent believers, Christians in their homeland been slaughtered by these wicked men, let the blood of these individuals be avenged upon them.

Nigeria shall not become Syria. Any devil planning it, the God that I serve will hit at them. Now, God is angry with the wicked everyday.

Any pastor, any believer that is happy with the wicked is an ungodly man. Any man! I don’t care the office you hold. You are not angry with what God is angry with means you are a bastard!
Jesus, every sellout in your body, let it be met with judgement.

My spirit is angry, the calling on my life is angry.
You shall not make away with it!
You don’t need permission to hit back at a robber, Christians come awake! You are not dummies, come awake!
Government is not by a group of people, it is government for the people, by the people. Let there be no sympathizer with these wicked people in this church or else the curses we release will touch them.

If your baby is slaughtered, sliced, will you be hanging around like that?

These wicked men are trying to test the ground to see how many places they can get to. You dare any further, you will be resisted with the forces of vengeance.

Let all media people carry it. This is the voice of the Lord for the hour. The anger of the Lord is against the wicked and it shall land on their heads’ Bishop Oyedepo concluded.

2019: I Don’t Belong to any Political Party – Bishop Oyedepo