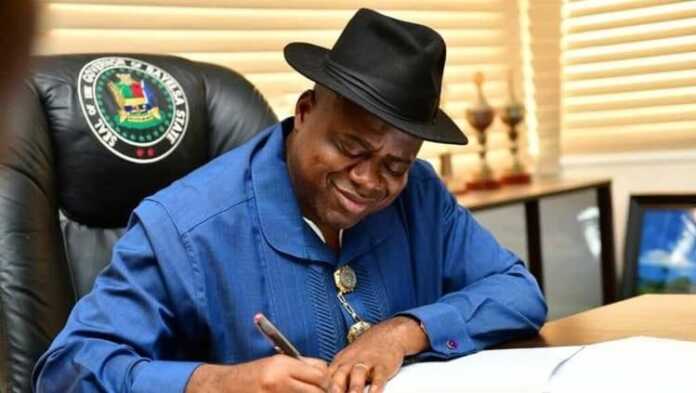 The Bayelsa State House of Assembly has denied the rumoured impeachment plot against the state Governor, Senator Douye Diri, over alleged failure to give a percentage of the federal government refund to assembly members as agreed.

Rumours had it recently that members of the state assembly were collating signatures to remove the governor for not sharing part of the N38 billion Federal Government refund to the state for executing federal government projects with the assembly members.

In a press conference on Tuesday, the Chairman, House Committee on Information, Barr Tare Porri said the house has never contemplated impeaching the governor but rather worked in synergy with the executive to bring the dividends of democracy to the people of Bayelsa State.

Porri, who represents Ekeremor constituency 1, said the house can not request the sharing of monies refunded meant for the development of the state.

”Our interest is that whatever money comes into the state should be used for the development of the state and the people. We are elected to represent our people and also carry out functions that will place a check on the executive arm of government and not to demand money meant for the state.

“The 6th Bayelsa State House of Assembly under the leadership of Rt Hon. Abraham Ingobere is working very hard with the executive arms of government to deliver the dividends of democracy to the people of Bayelsa State, and rumour like this is targeting at distracting the assembly, but we are ever ready to deliver on our mandate.

“We want to warn those behind the rumour, those who think that they can just wake up and accuse the house that is made up of respected and honourable members representing 24 constituencies, it’s quite unfortunate that we have to gamble with this type of situation in this state”

“Bayelsa had gone through a lot and this is the time for us to support the State Governor to deliver on his campaign promises, so on behalf of the state house of Assembly, we want to condemn such unfounded rumour around Bayelsa and beyond that the State Assembly has concluded plans to impeach the governor”

”We have never contemplated that, the assembly is in partnership and synergy with the governor to move the state forward.

”We have financial autonomy which we are enjoying and we haven’t complained to anybody that we have issues with money meant for the assembly. We are working in line with the constitutional provisions of the country.

“I have not had sex since crowned as Queen”...