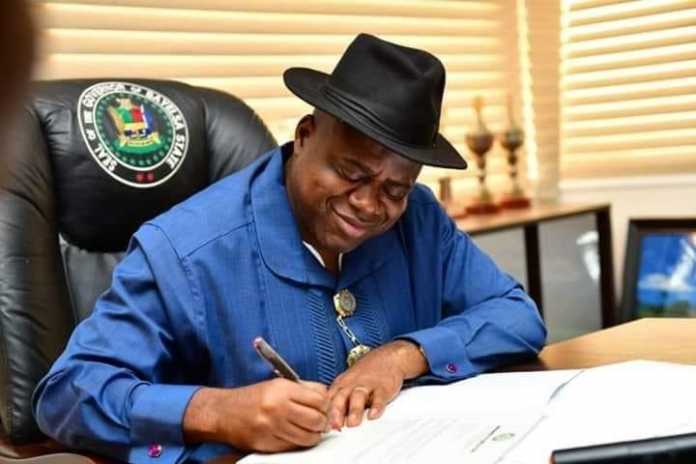 In many climes, the idea of commemorating hundred days in office, particularly, for leaders of government such as; president of a country or a state governor has become very popular. Historically, hundred days in office has its origin in France where the concept of Cent Jours (Hundred Days) refers to the period of 1815 between Napoleon Bonaparte’s return to Paris from exile on the island of Elba and his final defeat at the Battle of Waterloo, after which King Louis XVIII regained the French throne. That is a long story that can wait for another day. It was, however, Franklin D. Roosevelt, the 32nd president of the United States of America who popularized the ideal and made it part of American political culture.

As a scholar would say; “America has a way of shipping its garbage around the world”. The idea of commemorating 100 days in governance has become a worldwide phenomenal.

In Nigeria, we have also copied the idea of rolling out drums in commemoration of 100 days in office. Unfortunately, many people wrongly assumed that the success or failure of an administration can be determined within the first hundred days of a-four year tenure. While one readily agrees that the dawn could foretell the day; the dawn is not equal to a day.

Unfortunately, like everything we have copied, we always copy things without full grasp of their philosophy. We copy the idea of first 100 days without the ideal. Just like the proverbial child who picked an empty shell of a snail and called it a snail, pretending that a shell can be served for dinner. Everyone knows that his dream is on a parallel lane with reality.

Since we have failed to understand the concept of hundred days, Nigerians often judge leaders in terms of bricks and mortar as well as bolts and nuts. The head of government is said to be performing when he could point at a six classroom building, pave a pathway, and inaugurate a medical facility. Yes, these are component of development, and government must strive to provide them, but, this cannot be considered a genuine yardstick to measure an enduring and sustainable performance of a government within the first hundred days in office. Certainly, No. And this is the candid view of the current Governor of Bayelsa State, Senator Douye Diri.

So what is the essence of hundred days in office? Answer to this hides in the premise on which Franklin D. Roosevelt, who nurtured 100 days in office as a governance culture, laid it upon. The 32rd American president used his 100 days in office to introduce policy direction for a government that had to confront with what was christened the Great Recession.

He took swift action to calm the nation’s crippling financial panic in form of a far-reaching Emergency Banking Act, and the fireside chats that became Roosevelt’s signature. He also rolled out the programs that made up his New Deal, including 15 major pieces of legislation in the first 100 days. He set a first 100-day standard against which all U.S. presidents after him have been measured. President Roosevelt neither commissioned a school nor paved a road in his first hundred day in office; however he led America out of the woods and put it on a path of perpetual growth.

Since assumption of office in February 14, 2020, about one hundred days ago as the 5th Executive Governor of Bayelsa State, Senator Douye Diri has by accident or design of history followed the footstep of the legendary Roosevelt in his approach to the governance of the state.

The first major task that stirred Governor Diri in the face was the urgent need to unite the state after a rancorous, divisive and tension socked election. Right from the rhetorics of his inaugural speech, many other communications, public and private engagements, the governor has made deliberate effort to bring everyone, regardless of party affiliation, on board the Bayelsa project. There is no doubt that the task of uniting opponent is not going to be an easy task. There are however indication that the governor is achieving remarkable success in this regard. When was the last time you heard about federal government initiating any kind of capital projects in this space called Bayelsa? Thanks to Governor Douye Diri’s single-minded commitment to collaboration, the situation is changing for better. The recent ground breaking ceremony for the NNPC 200 Bed-Hospital for the South South Region at Igbogene was a demonstration of such commitment. The backslapping that came with the event, even among political opponents of the recent past were in line with governor Diri’s determination not to play politics with issues of development, but to bring everyone together in the task of achieving prosperity for all residents.

Douye Diri administration has also indicated that he will run a slim, smart and cost effective government in the face of dwindling economy, inherited liabilities and several sector of the economy yearning for attention. This informed the merging of government ministries and departments that have overlapping responsibilities to promote efficient service delivery. Accordingly, this policy direction will cut down the overhead cost ministries which have been reduced to 21.

Closely related to this is the deliberate effort at promoting the welfare of the Civil Servants who are the engine room of governance as a way of motivating them for better service, discourage corruption and give them hope. If government policy will succeed, the executioners of such policy must be treated right. Regular payment of salary, is not an achievement but responsibility of government, the governor himself has said. This standpoint does not, however, diminish the fact that it affects the moral of workers. Since February, the Civil Servants are getting familiar with the salary alert promptly without delay of any sort.
Corrupt practice may also thrive when the workers are not sure of their gratuities after retirement. Such sentiments are being eliminated with the commencement of payment of gratuities to retired workers. A sum of two hundred million naira is being set aside every month to gradually pay the outstanding gratuities. This is indicative of one thing; the administration of Douye Diri will ensure that everyone received his dues on time.

Douye Diri is an honest man and is also committed to transparency and accountability in government. Openness in government as far as the governor is concern will promote public understanding and participation. Signing into law of three different pieces of legislation; Public Procurement Amendment 2020, Fiscal Responsibility Amendment Bill 2020 and Debt Management Amendment Bill 2020, is indicative of the core values of honesty, transparency, accountability that will pervade the administration. The amendments were at the instance of the executive, thus given out the Governor as a man of honour whose only goal in government is to use public resources for the public good.

Security of life and property is another focus area of the administration. This will find more expression in months ahead. Police report has shown decline in criminal activities in the state. It was not a product of accident. The state has witnessed a remarkable improvement in power supply after the governors meeting with management of Port Harcourt Electricity Distribution Company (PHEDC) coupled with the lighting up of streets in Yenagoa at night by government, making the job of security officers a lot easier. The criminals seem to have no hidden place any longer. The demolition of Illegal structure by the present administration in major markets notorious as hideout for criminals is another signpost of Governor Douye Diri understanding that security is a major component for prosperity. While a modern car park would be built at the recovered spaces at Swali market, the design of a new roundabout at Edepie is also ready for the expansion project. This is clearly a brave move towards urbanization and implementation of the original Yenagoa master plan. There is a new commitment to improve facilities in Yenagoa so as truly justify its state capital status.

Governor Douye Diri, in the last hundred days, has also demonstrated leadership with the effective manner that the issue of Covid-19 has been handled making the state one of the least impacted by the pandemic. In spite of the low instance of the pandemic, the administration has made critical preventive measures and in compliance made easy palliatives to the downtrodden in the state.

The appointment of people based on competences by the governor is one other matter to be happy about. Appointment of less competent people has a way of rubbing off on the performance of any administration. Those who know the governor closely have also attributed his deliberate delay in appointing cabinet members as part of commitment to appointing only vibrant, experience and competent persons into positions of authority in order to fast-track Bayelsa movement to the land of prosperity.

The 2020 budget is another document that has shown the direction of the current government towards prosperity more than any other thing. It has clearly spelt out the agro-economic wit and infrastructure development biases of this government. For the first time in 21 years of democracy, agriculture as a sector received second largest budgetary provision after Ministry of Works and Infrastructure. This is in tandem with the campaign promise of the governor to diversify the state economy, ensure food security and sustainable employment to the teeming youths.

Gov. Douye Diri 100 days in office has indeed set the character, the core values and commitment of his administration to implementing party’s manifesto and campaign promises of consolidation for prosperity of all Bayelsans.

The Deputy Governor, Senator Lawrence Ewhrudjakpo, has provided that support required of a great ally in the political and development journey. The team play no doubt is yielding great success.

In days, months and years ahead, the full impact of the policy direction of the Miracle Governor, which is now obvious, will put Bayelsa State on the fast lane to prosperity for everybody.

Hushpuppi is into real estate Business, not a fraudster...

Why I forgave Ned Nwoko for marrying my daughter...

STATE OF THE NATION: The Leadership Question – By:...