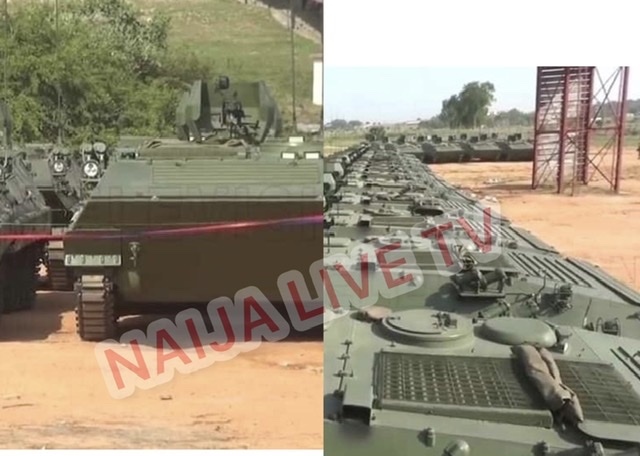 The Nigerian Army has taken delivery of 60 new VP – 1 Type Tracked Armoured Personnel Carriers manufactured in China to boost the ongoing war against Boko Haram insurgency and banditry in the North-East and North-West.

Speaking during the commissioning of the new armoured tanks at the Nigerian Army School of Infantry, Jaji Kaduna State, the Chief of Army Staff, Lieutenant General Faruk Yahaya said the deployment of new platforms to the battlefield underscores the Federal Government’s commitment to ensure that a state of normalcy is achieved across the country.

Represented by the Commandant of Infantry Corps, Major General Victor Ezugwu, the Army Chief assured that the military is taking cogent steps in ensuring that bandits and terrorists are neutralised and annihilated throughout the country.

“It is an effort which is in line with the Federal Government’s cardinal objectives of tackling the totality of the security challenges facing our dear country Nigeria,” the Army Chief said.

“These platforms we commission here today is in addition to other equipment brought in for the purpose and this underscores the strategic resolve to ensure that a state of normalcy is achieved across the length and breadth of Nigeria.”

While thanking President Muhammadu Buhari for supporting the armed forces, the COAS said the vehicles would boost the fight against insurgency and banditry in the North-East and North-West regions.

He, however, warned the bandits and other non- state actors to either surrender with their arms or be sent to hell.

Lieutenant General Yahaya also reiterated the Nigeria Army’s commitment in protecting the territorial integrity of the country, adding that this would be achieved in collaboration with relevant stakeholders, partners and other agencies.