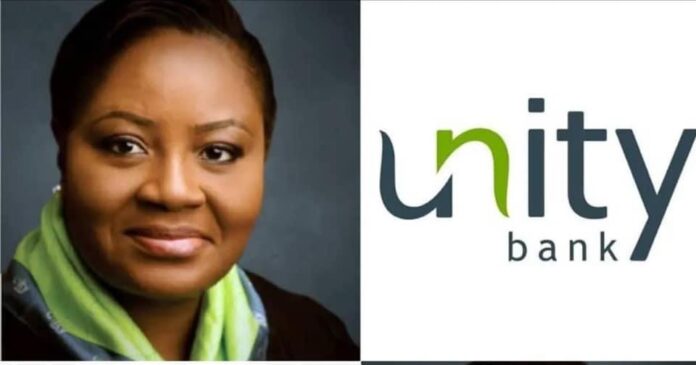 Only a few months ago, the board of Unity Bank was allegedly pressuring the bank’s CEO, Tomi Somefun, to quit due to her incompetence and failing to turn things around for good since she assumed office on the 4th of March, 2015.

Rattled by the expose in the publication, NAIJA LIVE TV reliably gathered that Somefun ran to her ‘Saviour’, former President Olusegun Obasanjo, to intervene on the board and allow her complete her tenure which expires in months.

The Former President Obasanjo again allegedly appealed to the Unity Bank board led by Mr. Aminu Babangida to back-down on the move.

It was previously reported that, Somefun, a pastor of the Redeemed Christian Church of God (RCCG), is been accused of failing to restructure the bank, which is still battling to stay afloat.

Mr. Abdulqadir, who joined the bank in April 2018 and has substantial financial experience, is regarded to be the board’s favorite candidate for the position.

Until his appointment as the bank’s director, he was the Ag. Managing Director/Chief Operating Officer of FMDQ Clear Limited and the vice president and divisional head of FMDQ OTC Securities Exchange Plc’s Post-Trade Services.

Usman graduated from Bayero University in Kano, Nigeria, with a bachelor’s degree in accounting and a master’s degree in Islamic finance (Durham University, UK).

He was recognized as an associate member of the Institute of Chartered Accountants of Nigeria in the year 2000.

He worked for the Central Bank of Nigeria (CBN) for 13 of his nearly 20 years in the banking industry, retiring as a major bank examiner.

While at the CBN, Usman worked on a number of projects, including the Working Group on Liquidity Risk Management of the Islamic Financial Services Board and the Project Management Office for the implementation of Nigeria’s new financial stability framework.

Usman was the first executive director (chief risk and finance officer) of SunTrust Bank Nigeria Limited and the founder of East Atlantic Advisors Limited, a business consultancy and financial advice services organization based in Lagos.

The lender’s performance over the last five years hasn’t exactly impressed investors, and there have been a few blips that indicate something isn’t quite right with the bank