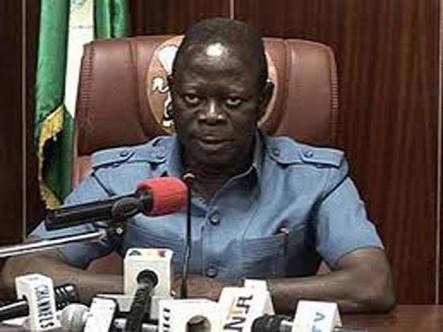 National Leader of the All Progressives Congress, Asiwaju Ahmed Tinubu, ex-interim National Chairman of the APC, Chief Bisi Akande and governors on the party’s platform, have endorsed former Edo State governor, Adams Oshiomhole, for the position of the national chairman of the party.

Apart from Tinubu and Akande, some of the governors who were at the facility to meet with Oshiomhole include: Atiku Bagudu (Kebbi), Rotimi Akeredolu SAN (Ondo), Ibikunle Amosun (Ogun), Tanko Al-Makura (Nassarawa) and Abdullahi Ganduje (Kano).

Others were: Yahaya Bello (Kogi) and Simon Lalong (Plateau).

Tinubu, who spoke to reporters shortly after he and Akande met with Oshiomhole behind closed doors, said his visit was meant to show solidarity with the former Edo State governor as well as to further strengthen the party to work for Nigeria’s progress.

He said, “My visit symbolises solidarity and unity of purpose to continue to bring a progressive party that will carry Nigeria in a progressive manner, (to bring about) good governance with courage and commitment.”

In a response to a direct question as to whether his visit was an endorsement of Oshiomhole’s aspirations, he said, “There is no doubt. I have worked with him, why should I have any doubt? The stuff of this game (politics) is that you win. Have you seen a democrat who is ready to lose? Just accept it, it is about choice.”

At this point, Chief Akande said, “Democracy is a matter of choice; you would want somebody who is competent enough to do it (the job) and you allow him to do it.”

In response to a question on the parallel congress held in Lagos, Tinubu said, “Anybody can get a branch of a bank anywhere but check whether your (Automated Teller Machine) card will work.”

Earlier, the Kebbi State Governor, Atiku Bagudu, told journalists that all the governors on the party’s platform were looking forward to Oshiomhole’s chairmanship.

Asked how many governors were on board, he said, “All of us. Our party is looking forward to the chairmanship of Adams Oshiomhole.”

Bagudu said though he was not the chairman of the Progressives Governors’ Forum, “I can tell you that Adams Oshiomhole is my candidate as a governor and all the governors I know. He is the candidate for the chairmanship.

In a separate interview, the Ogun State Governor, Ibikunle Amosun, said, “He (Oshiomhole) is one of us. That is why we had to come and identify with him here and you know what that means.

“You know he is running for the office of the chairman of the party, so we have to come and identify with him.

“I know for me and for us in Ogun state, we are supporting him.”

Also speaking in a similar vein, the Kano State Governor, Abdullahi Ganduje, stated, “You know Kano state has the largest number of delegates to the national convention and by seeing me here, it means all the votes from Kano State will go to the former governor of Edo State.

On his part, the Ondo State Governor, Rotimi Akerodolu SAN, said, “Speaking for Ondo State, it’s so clear even to a blind person to know that we don’t really have a contest for the office of the chairman. Be that as it is, I believe that when we come in full force, you will see where our votes are; that is if there is ever any contest.”

This came at a time one of the chairmanship aspirants, Chief Ibrahim Emokpaire, announced his withdrawal from the race and declared his support for Oshiomhole.

Emokpaire, who appeared at a joint press conference with Oshiomhole, said, “My decision (to withdraw) was taken after due consultations with members of my family, my political associates, leaders of our great party and admirers.

I have decided, as a loyal party member and a leader of our great party, to withdraw my nomination in order to unite our party and join forces with our amiable leader, Comrade Adams Oshiomhole, to move our party forward.”