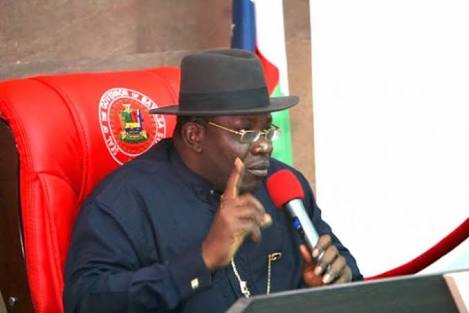 Bayelsa State Governor, Honourable Henry Seriake Dickson on Tuesday swore in a six-member Commission of Inquiry to ascertain the immediate and remote causes of the civil disturbances and unrest that, occurred in and around Amassoma, host community of the state-owned Niger Delta University, in Southern Ijaw Local Government Area.

Governor Dickson gave the charge in a nine -point terms of reference to the Commission during the swearing in ceremony of its members in Government House, Yenagoa.

A statement by the Chief Press Secretary to the Governor, Mr. Francis Ottah Agbo said the Governor called on communities hosting tertiary institutions in the state to protect educational institutions sited in their areas.

Governor Dickson also urged members of the commission to equally ascertain the immediate and remote causes of the forcible sealing-off and the destructions that, occurred in the Niger Delta University.

He called on the commission to identify the perpetrators of the unlawful acts and their sponsors, if any and stressed the need for community leaders to always draw the attention of the state government to any breach to peace in their localities.

The Commission of Inquiry, which is expected to determine the number and identities of persons injured or killed during the civil disturbances, is also to determine the extent of damage to property, both public as well as private, if any during the incident.

Governor Dickson charged the people of the state, particularly the youths not to take laws into their hands, but rather collaborate with security personnel to maintain law and order.

He urged the Commission of Inquiry to recommend measures aimed at averting future occurrences of such incidents within and around the Niger Delta University and its host communities, as well as make any other recommendations that, may be deemed fit in the circumstances.

According to Governor Dickson, the commission shall take evidence in writing and orally to enable it perform its task diligently.

He also directed the commission to submit its report and findings within 30 days from the day of its first sitting.

Governor Dickson also met with stakeholders of Amassoma community on the need to keep the peace and work with the government for the stability and progress of the state.

Chairman of the Commission of Inquiry, is the Deputy Inspector General of Police, Michael Zuokumor (Rtd), while Mr. Godwin Ebikake is to serve as Secretary.