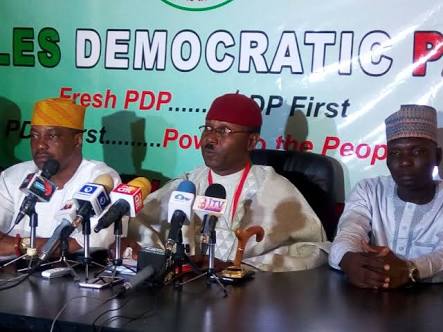 STRONG indications have emerged that as the All Progressives Congress, APC holds its National Convention today, former Secretary to the Government of the Federation (SGF), Ambassador Babagana Kingibe, is set to replace the new Peoples Democratic Party, nPDP with his structure of the Social Democratic Party, SDP.

It will be recalled that Babagana Kingibe, had in February this year, said that he would not stand against President Muhammadu Buhari in the 2019 election.

The former SGF said this when his purported campaign posters for the presidency recently circulated in Abuja and other cities.

Kingibe had aspired to the presidency in 1991 under the defunct Social Democratic Party (SDP) but lost at the primary.

He later became the running mate to late Chief Moshood Abiola who won the 1993 presidential election that was eventually annulled by then Military President, Ibrahim Babangida. But of recent, there were speculations in the country that he was warming up to take another shot at the presidency again.

However, in a statement he released then, he denied his alleged bid for the position, saying that he could not contest for the presidency with President Muhammadu Buhari in the ballot, adding that Buhari and his policies would “rescue Nigeria from the accumulated decay, loss of moral compass and leadership failure”. Kingibe who had expressed his “full support” for the president, had said, “I am experienced enough in politics to know that you do not start a political campaign with posters without talking to anyone about your ambition”.

“The phantom allegations and the pasting of posters are too striking to be coincidental. This is a miscalculated attempt to malign and defame me.”

We will leave APC,with or without Saraki – Baraje