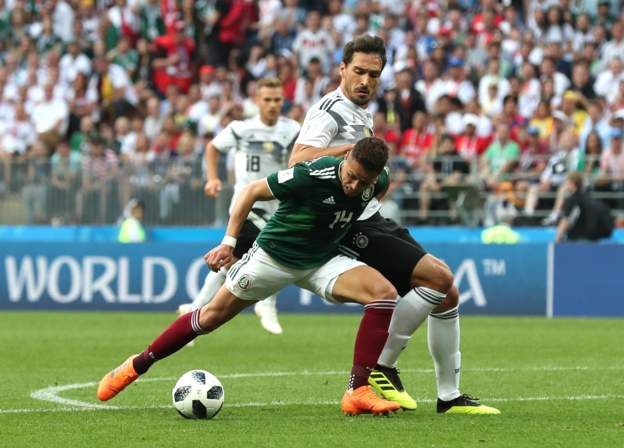 Defending World Cup Champions, Germany have suffered a shocking 1-0 defeat to Mexico in their opening World Cup match on Sunday.

Hirving Lozano was the hero of the day for Mexico as his 35th minute strike gave his country the famous victory.

In the build up to the goal, Mats Hummels challenged Javier Hernandez on the half way line, he played a one-two and Hummels was left on his backside eating Russian turf.

Mexico picked the right pass this time to free danger man Lozano on the left of the area, he was able to dance inside a weak challenge and then crash past Manuel Neuer at his near post.

Despite having 67 percent of ball possession, 26 shots of which nine were on targets and eight corner kicks, Germany could not get past the Mexican defence.

Germany went close through Toni Kroos, whose free-kick was pushed on to the bar by Guillermo Ochoa.

Joshua Kimmich and Timo Werner also had good chances for Joachim Low’s side.

The result means Germany are the third champions in succession – following Italy (2010) and Spain (2014) – to start their defence with a defeat.

History was also made when Mexico’s 39-year-old former Barcelona defender Rafael Marquez came on in the second half to become the third player to have played in five successive World Cups. The other two players are Germany’s Lothar Matthaus and Marquez’s compatriot Antonio Carbajal.

COVID-19: Trump built a fence to block Mexican from entering USA …US citizens are running away from their homes [BIG LESSON]