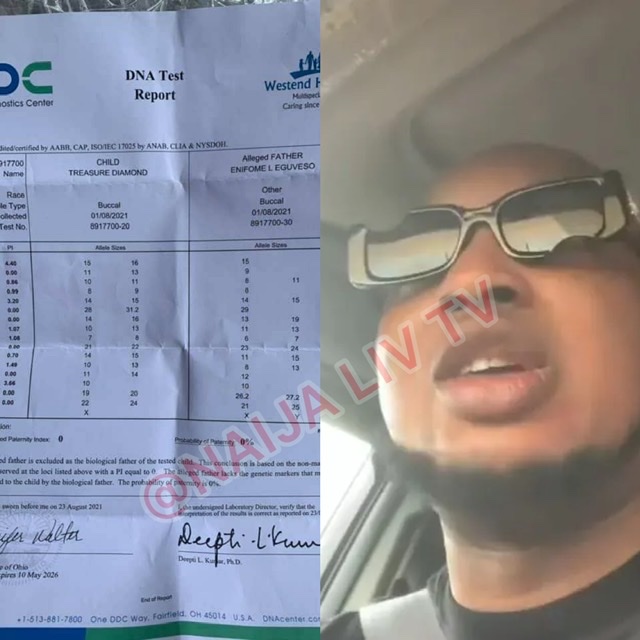 A Nigerian man, identified as Eguveso Enifomee, has taken to social media to lament after a DNA test allegedly revealed that the girl he thought was his daughter, is not his.

Enifome, in a video he shared on his Facebook page, revealed that the young lady claimed the baby girl was his when she was 2 years old. According to him, he was sceptical about being the girl’s father but he still accepted her and began to play his role as her dad.

However, he decided to carry out a DNA test to prove that he is truly her biological father. When the result came back, he discovered that he is not the father of the little girl.

Sharing a photo of the DNA test, he wrote, “After a DNA confirmation from western hospital Warri to the United States of America this child is NoT MY child”

In the video he shared, the disappointed man said,

“I have always said it from day one that the possibility of this child being mine is very low because when she was pregnant I was not aware. She was pregnant, two or three years later that she came saying she is your child. I was the one who even reach out to her to say I heard you have given birth. She said ”It is your child”. I was like ‘ which dirty child?’. She said a pastor told her that the father would ask of her.

I agree when we were in school we were together for sometime. She was not dating only me. We were many. I was just a side nigga, She had a boyfriend.

When she was pregnant, I was not aware. Two years later she came saying she was my child. She took the baby to my dad, my dad accepted., saying the child resembled me.”

Watch the videos below,