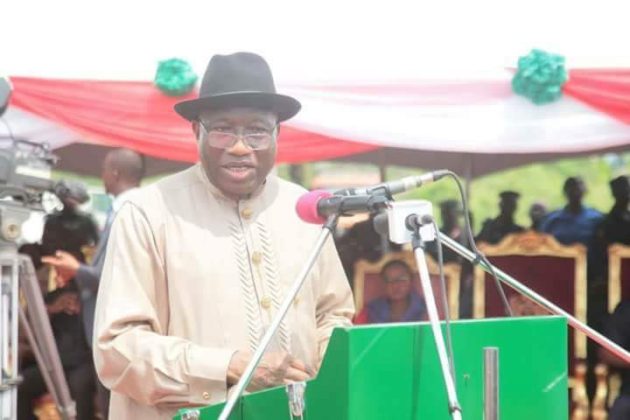 Former President Goodluck Jonathan has stated that the Rivers State Governor, Nyesom Ezenwo Wike merits the title of Mr Projects because of his pro-people projects.

Speaking before commissioning the 22.3 kilometer Airport–Ipo-Omademe -Ozuoha Road in Ikwerre Local Government Area on Tuesday, Jonathan said that the title of Mr Project is not an exaggeration as facts on ground attest to it.

He said: “The whole country calling Governor Wike Mr Projects is not an exaggeration. It is not political.

“PDP governors don’t just talk about projects, they do projects. ”

The Former President said that if any opposition politician refuses to see the numerous projects in Rivers State, it is his choice.

Former President Goodluck Jonathan said that he lived in Rivers State after his secondary school days up to 1998, pointing out that the outstanding transformation of Port Harcourt is obvious.

He commended Governor Wike for reaching the hinterland through the Airport–Ipo-Omademe -Ozuoha Road. He said that the Rivers State Governor deserves the support of the people.

“Whenever Governor Wike invites me for a project commissioning, I am happy. The governor is an example of a good leader, a committed leader.

“What Governor Wike has done in three years is quite commendable. The quantum of projects are scattered across the state. Last year, I was here to commission the second Nkpogu Bridge and today I am here to commission a road to the hinterland “, he said.

He said that everyone believes in Governor Wike because of his efforts at projects delivery.

In his remarks, Rivers State Governor, Nyesom Ezenwo Wike said the PDP Governors are committed to the development of their states.

He said in Rivers State, his administration has executed projects in urban and rural communities for the benefit of the people.

The governor said that several projects have been lined up for commissioning in different local government areas, while more will be flagged off.

“I am happy that we are delivering projects across the state. This is a continuous process. We started from Port Harcourt and Obio/Akpor Local Government Areas because majority of our people live here”, he said.

While describing Jonathan as the father of peace and democracy in Nigeria , Governor Wike thanked him for supporting the process of the emergence of New Rivers State.

He said: “We are happy because you stood by us and we have not disappointed you. This is to let you know that those you supported are performing “.

Former Rivers State Governor, Sir Celestine Omehia said that Airport–Ipo-Omademe -Ozuoha Road has opened up the area and will improve the agro-based economy.

Rivers State Works Commissioner, Mr Dum Dekor was non-existent, noting that the Rivers State Government under the leadership of Governor Wike constructed the important road with the right drainage.