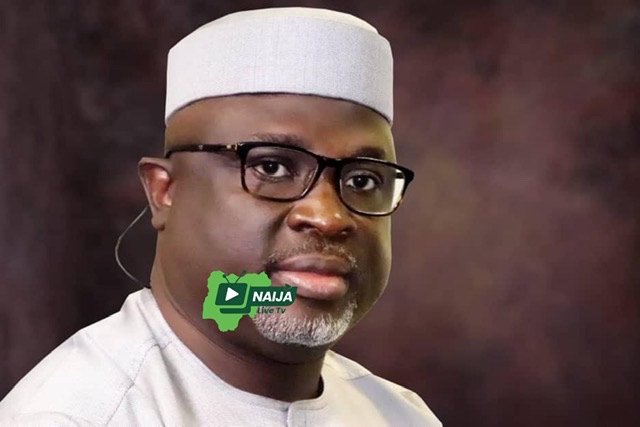 The Federal lawmaker Representing the Nembe Brass Constituency, Hon. Israel Sunny-Goli has reacted on the alleged attack on him when he visited Nemebe LGA for the On-site Assessment of the recently OML 29 Oil Spill area.

Hon. Sunny-Goli said his rumored attacked was just a minor incident with some miscreants, who succeeded in snatching the bag he was holding out of his hand, which they wrongly assumed was stuffed with cash.

NAIJA LIVE TV gathered that the unknown Hoodlums allegedly attacked the Bayelsa Federal lawmaker and snatched the big bag he was holding which allegedly belongs to HRM King Biobelemoye Josaiah Ogbodo VIII, Amayanabo of Opu-Nembe when he accompanied the Minister for Petroleum Resources, Chief Timipre Sylva to the Spill site.

“Truth is, there’s no cause for alarm, as I wasn’t attacked as rumoured. It was just a minor incident with some miscreants, who succeeded in snatching a bag out of my hand, which they wrongly assumed was stuffed with cash”

“It turned out, that the bag in question wasn’t mine, but that of HRM King Biobelemoye Josaiah Ogbodo VIII, Amayanabo of Opu-Nembe, which I was carrying for him. The snatched bag only contained some documents, ATM cards and some petty cash belonging to the King and not stuffed with cash as presumed by the miscreants”.

“Yesterday, 24th November 2021, I visited the Santa Barbara oil field operated by Aiteo Eastern Exploration and Production Company (AEEPCo), in Nembe L.G.A, in the company of the Minister of State for Petroleum Resources, H.E Timipre Sylva and HRM King Biobelemoye Josaiah Ogbodo VIII, Amayanabo of Opu-Nembe, for an on-site assessment of the oil spill from Oil Mining Lease (OML) 29”

“No doubt, what we have on our hands is a disaster of monumental proportion. Given the intensity with which the crude oil is spewing into the ecosystem, one can with the benefit of hindsight, say it has caused extensive degradation to the environment and foisted untold hardship on the inhabitants of the affected communities . This could get worse, if the unfortunate situation is not urgently brought under control”

“It is on this premise that I am reiterating my call on Aiteo Eastern Exploration and Production Company, operators of Oil Mining Lease, OML, 29, to as a matter of urgency, intensify its effort at stopping the oil spill, as well as deploy sufficient containment booms to drastically minimise the impact of the spill on the environment”

“Expectedly, all the globally recognised protocols applicable to incidents of this magnitude, would be religiously adhered to by Aiteo Eastern Exploration and Production Company for the speedy restoration of normalcy to the affected environment”

“Our marital adventure has been nothing short of heaven-on-earth” – Bayelsa Lawmaker, Hon. Israel Sunny-Goli Celebrates Wife

Bayelsa Lawmaker Praises Nengi …Says, She has set a good standard for Nigerian women and portrayed Ijaw nation as a land of amazingly decent...