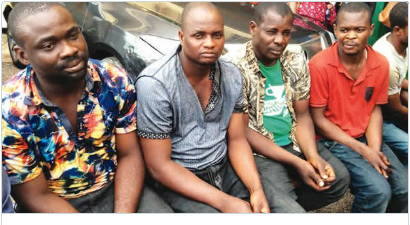 The suspects, Ebuka Ezeanyido, 28; Chidebe Okocha, 36; Chukwuma Amichie, 30; Augustine Agbo, 32; and Chinedu Obi, 25, were arrested following investigation into the disappearance of one Michael Ibebuogu who was reported missing by members of his family.

Ibebuogu was said to have left his brother’s house at Apo, Abuja for Suleja, Niger State on May 27, 2018 but never arrived at his destination.

The missing man’s phone was however traced to one of the suspects who led detectives to arrest his accomplices.

The FCT Commissioner of Police, Sadiq Bello, who paraded the suspects in Abuja on Thursday, explained that Okocha confessed that he hit Ibebuogu on his head with a hammer when he tried to take control of their operational car from the driver.

“The suspects said they abandoned his body under Apo Bridge. Efforts are ongoing to recover the remains of the deceased. The operational car used by the gang, an army green Volkswagen Passat Wagon, one hammer and phone of the deceased have been recovered as exhibits,” Bello stated.

Ezeanyido, who said he was a taxi driver before he joined the robbery gang said, “I and my friend, Okocha came to Abuja, so we picked the man in our cab. When the man noticed that we wanted to rob him, he started dragging the steering with the driver; so this brother (Agbo) hit him on the shoulder with a hammer and we stopped the cab and allowed him to go, but he was not dead when we left him.”

Okocha claimed he was doing business at Wuse market, Abuja but decided to join the robbery gang after he had issues with some people.

Narrating how the gang operated, he said that they usually robbed one person at a time in their taxi.

He said, “We usually pick a passenger and while driving, the driver would ask him to put on his seatbelt while magic finger (Agbo) would cleverly snatch the victim’s money or phone.

“So the man (Ibebuogu) noticed what was happening and he attempted to take over the steering, I hit him with a hammer on his shoulder and wrist, we stopped the cab and he disembarked; we were surprised to hear that he died,” Okocha said.

Agbo who was responsible for picking the victim’s pocket or bag claimed he joined the gang about three months ago, adding that he had robbed only four persons.

“I just started robbing about three months, I have robbed just three or four persons,” he stated.

The police also revealed that they have arrested one Kasimu Yakubu at Ankpa, Kogi State and recovered an Abuja coloured taxi Volkswagen Golf car with registration number ABJ 447 ES which was earlier reported snatched from its owner around Apo at gunpoint.

“The suspect revealed that his syndicate specialised in snatching cars from Abuja and selling them to ready buyers in Kogi State. Effort is being intensified to arrest other members of the gang and recover the arms used for the robbery operation,” Bello said