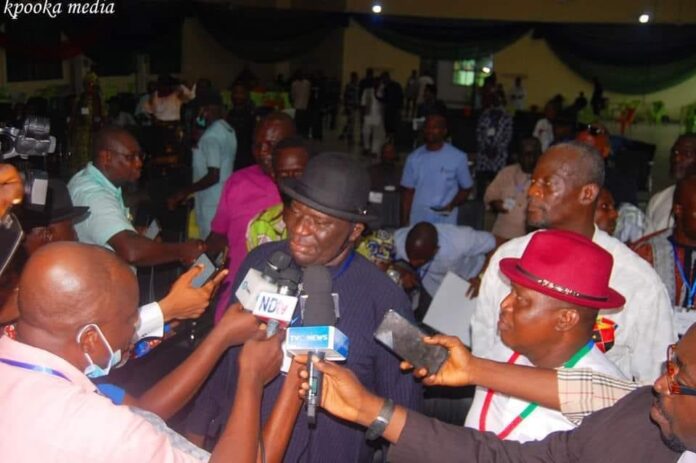 The Ijaw ethnic nationality has averred that they are not party to any successionist agenda either in part or full but are prepared to legally and peacefully negotiate its exit from the Nigerian State like other aggrieved ethnic nationalities as a distinct Ijaw Republic if urgent steps are not taken to urgently address the perceived imbalance and injustice inherent in the polity.

Okaba, who titled the text of the press conference, ‘Don’t Take Our Silence for Granted’ said, “The Ijaw nation, conscious of our desire to live in a country where our rights to live peacefully and apply our God endowed talents and resources for our collective improvement and wellbeing, no longer feel safe to be part of a country where inequality, inequity and nepotism and impunity have become defining principles of governance.”

He pointed out that the major reason for this situation is the heightened injustice and marginalisation of Nigerians, particularly of the minorities including the Ijaw ethnic nationality, a clear evidence he noted is the unacceptable story of the Federal Government spending over 15 years in constructing a yet to be completed major East-West Road that ferries petroleum products across the country.

His words: “The Ijaws have become reprehensive and afraid of being part of an unworkable union. Having endured the unsavory treatments and crude exploitations over the years, and the noted resolve of the present-day leaders to continue their stranglehold on the Ijaw people through mor obnoxious laws (the water resources bill sponsored by the Buhari administration) our faith in the Nigerian union has been grossly eroded.

“Rather than continue to sacrifice and carry the burdens of an unappreciative Nigeria nation, we wish to state without equivocation our resolve for self determination, we are prepared to legally and peacefully negotiate our exit like other aggrieved ethnic nationalities but also as a distinct Ijaw Republic with ethno linguistic, cultural affinity and geographic contiguity and not in part or full of any other secessionist agenda.

“This address also serves as an advance notice to all Ijaw people, our neighbours, particularly in the Niger Delta region, others oppressed and deprived and the Nigerian State, preparatory to the convocation of an all Ijaw summit that will ultimately decide on the way forward in very specific terms.

“Our current resolve for self-determination and self-actualization can only be reversed if urgent steps are taken by the powers that be to urgently and sincerely address the minimum conditions precedent to guarantee the continues commitment of the Ijaws to the Nigerian project. These include

“The restoration of true federalism under a new constitution enacted by the people wherein a lean exclusive legislative list is prescribed for the federal tier of government. The restoration of Ijaw territory as non balkanized administrative and political federating unit(s) for reassurance of the Ijaw development pursuit.

“The repeal of all obnoxious and discriminatory laws and policies that have continuously undermine our fundamental human and environmental rights as indigenous people of Nigeria. The Ijaw land and the Niger-Delta region is the only place in the entire world where oil and gas is produced but have remained in impoverishe neglected and underdeveloped. Our retreat from militancy to meaningful and constructive engagement should not be undermined for cowardice.”