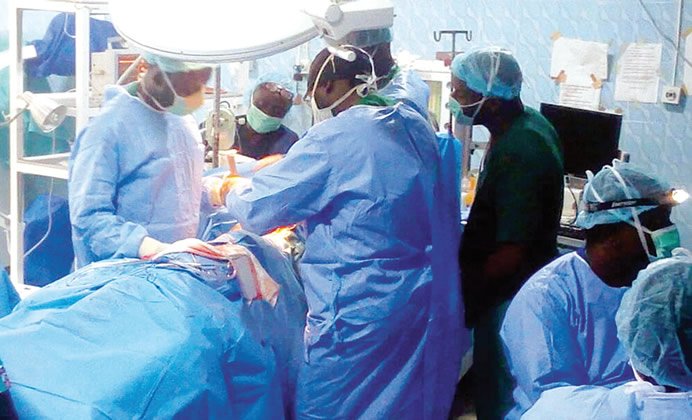 Some Nigerian doctors in Saudi Arabia, the United Kingdom and the United States of America have knocked the Federal Government for its alleged failure to invest in the health care sector.

The doctors, who spoke in separate interviews with Sunday PUNCH, said the inconsistency of the government to adequately cater for the needs of medical practitioners had led to massive brain drain in the health sector.

Some of the doctors who shared their experiences with our correspondents added that they cried and felt overwhelmed when they received their first wages, which some of them described as being 10 times higher than the wages in Nigeria.

One of the doctors, who spoke to Sunday PUNCH on condition of anonymity, said he was stunned when he received his first salary in Saudi Arabia.

He said, “To be honest, I was overwhelmed that I cried when I received my first salary in Saudi Arabia here. While I was in Nigeria, my salary was N113,450. Out of this, I had to take care of myself and my parents. It was just difficult coupled with the workload. There were times I had to attend to tons of patients.

“When the opportunity came to go to Saudi, I was a bit skeptical because some people were trying to discourage me. I just told myself that it was better to leave than to die here. Now, I work in the General Services Department in Riyadh here. I earn way more (than I did in Nigeria).

“I enjoy 36-day paid leave, good working conditions and my flight ticket was paid by Saudi Arabia. It is just sad that the Nigerian Government, in every way, has always tried to frustrate the medical profession. Every time you hear of industrial actions, salaries are not paid, no allowances.”

Another Nigerian doctor based in Riyadh, Saudi Arabia, who simply identified himself as Kingsley, said relocating abroad was the best decision he had ever made.

“Here, I only attend to four to eight patients (a day). Nigerian doctors are valued here; they really love the fact that we are so smart and intelligent. I would have loved to stay back home. The Nigerian Government really needs to do better. Nigeria will continue to lose better doctors if the country does not act fast.”

Another doctor, popularly known as Waka Waka doctor on Twitter, recalled that he left Nigeria for Saudi Arabia some years ago, adding that his life had witnessed a remarkable change.

He said, “When I arrived, I was hosted in a hotel for two weeks, all paid. I never paid rent during my stay there; I never paid for electricity. My salary as a doctor in Nigeria combining two jobs was less than N120,000. In Saudi, I earned around 10 times that amount.

“You can’t discredit the loneliness and struggle with the language to start with but that passes with time. Nigerian doctors are among the brightest and best anywhere in the world; all we ask is to be treated right, given proper remuneration that matches our skills and also improve the health system in the country of our birth.”

Similarly, a general practitioner based in the United Kingdom, Dr Bob Uge (not real name), who relocated in 2020 in the wake of COVID-19, said his foreign experience as a doctor was way better than his Nigeria’s.

“They respect Nigerian doctors abroad; unlike in Nigeria where a CMD (Chief Medical Director) will work you to death and still complain that you are not doing anything.”

Another medical practitioner, who spoke on condition of anonymity, said he just moved to the United States in July, adding that he was amazed when he got his first pay.

The optometrist, who works with the Cleveland Clinic, Avon, OH, said, “I called my colleagues to report myself. I thought I was overpaid as I just resumed. I haven’t even done anything substantial.

Some Stakeholders in the health sector have cited government policies, poor working conditions, low pay and quest for better standard of living as major reasons for the exodus of Nigerian doctors to other countries.

They stressed the need for the government to fast-track the negotiation process with the Nigerian Association of Resident Doctors in a bid to forestall the ongoing industrial action.

Investigations by Sunday PUNCH revealed that a recruitment process organised by the Ministry of Health of Saudi Arabia in Abuja experienced a huge turnout of consultants, senior medical officers and others who were in a rush to practice in the middle-eastern country.

The medical board of Trinidad and Tobago in an email exchange with Sunday PUNCHon Friday also revealed that no fewer than 344 Nigerian doctors were registered with the board.

According to the information shared with one of our correspondents, 235 out of these doctors were trained in Nigerian universities.

Also, information obtained from the General Medical Council of Britain highlighted that no fewer than 4,528 Nigerian trained doctors registered with the council in order to be able to practice in the United Kingdom.

Further checks by Sunday PUNCH showed that the average number of Nigerian trained doctors in the UK rose from an average of 1.3 per day between July and December 2020 to 3.3 per day in April and May 2021.

Between June 7 and June 8, 2020 – a space of 24 hours – about seven Nigerian trained doctors were licensed by the UK.

Nigeria has the third-highest number of foreign doctors working in the UK after India and Pakistan. However, Nigeria suffers a shortage of doctors.

The Medical and Dental Council of Nigeria puts the total number of registered doctors in Nigeria at 74,543 for the country’s population of about 200 million.

This puts the doctor-patient ratio in the country at 1:3,500.

This falls far below the World Health Organisation’s recommendation of 1:600.

A poll by NOI in 2018 also showed that 88 per cent of Nigerian doctors considered work opportunities abroad, but experts said the figure could be higher due to the rising insecurity and economic crunch.

Other popular destinations for Nigeria-trained doctors include the United States, Canada, Qatar, Saudi Arabia and Australia.

The National President of the NARD, Dr. Uyilawa Okhuaihesuyi, in an interview with Sunday PUNCH, defended the mass migration of medical practitioners.

He said, “Globally, every migration is based broadly on two factors namely ‘push’ and ‘pull’. Your question is basically on the pull (what attracts); higher wages, better employment opportunities, higher standard of living and lastly, educational opportunities. These are largely the causes that attract doctors and other care workers.

“In Saudi Arabia, they earn about US$3,000-$10,000 per month, depending on years of experience. This gives you some economic leverage minus the fact you work under best working conditions.

“Emigration years ago were just young doctors but right now almost all specialist pathways have been open for different doctors. So, even our professors close to retirement when it dawns on them how small their reserves are and how they can improve on it, they move without thinking about it.”

He said, “If comparatively things are stable here, I don’t see any reason why anybody would want to relocate to other countries. It shows that those options abroad are better than the ones they have at home. Unfortunately, I have not been one of those who want to go, but I know that the working environment in Nigeria is harsh.”

Another former NMA boss, Prof Mike Ogirima, confirmed to one of our correspondents that the government of Saudi Arabia pay Nigerian doctors higher than the Nigerian government.

According to Ogirima, Saudi Arabia pays Nigerian professors of medicine between N5m and N7m monthly while the Federal Government pays their counterparts in the country between N420,000 and N500,000.

The Federal Government had called on the NMA in a bid to forestall the ongoing strike.

Similarly, the minister of health, Osagie Ehanire on August 26, 2021 had written to CMDs and MDs of institutions to invoke a no-work-no-pay policy.

NARD however resisted the move, insisting that it would not resume until its demands were met.