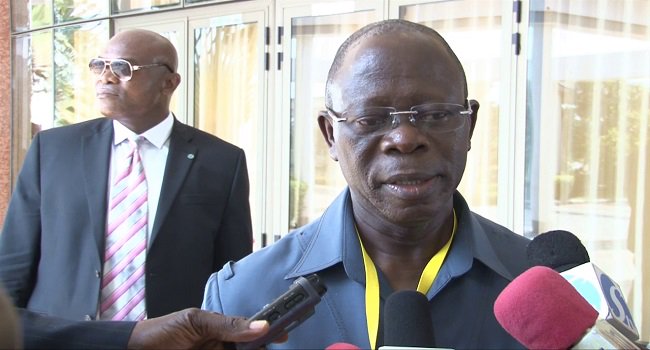 #NaijaLiveTv
The National Chairman of the ruling All Progressives Congress (APC), Adams Oshiomole says the party will not stop blaming past administration for its failure during its 16 years of governance in Nigeria.

Oshiomole, who was one of the speakers at the APC South East Mega rally for Buhari in Owerri, Imo State capital on Tuesday, blamed the PDP for failing in establishing projects in the South East during their administration.

“Those who are writing letters now. Those who have become unelected advisers. They governed as absolute rulers for almost three years. They came back eight years, what did they do about second Niger bridge? And then he wanted to take us to Mugabe where there is no end of tenure.

“Those who have spoken before me have spoken concerning all the initiatives and infrastructural projects that are going on in this part of the country. This is not to say everything is now fine. It is a journey. We cannot fix in three years, what PDP didn’t do in sixteen years.

The former Edo governor also canvassed for support for President Muhammadu Buhari in the 2019 presidential elections noting that the President will sustain his developmental projects if re-elected in 2019.

He said, “If President Buhari is doing what he is doing in the South-East right now, he will certainly do more in 2019.’

This is the first outing by the newly elected National Chairman of the APC.

Oshiomole was sworn in on Sunday, June 24 by the Attorney-General of the Federation and Minister of Justice, Abubakar Malami as the National Chairman of the All Progressives Congress.

This was after he was affirmed as the National Chairman of the party unopposed on Saturday, June 23