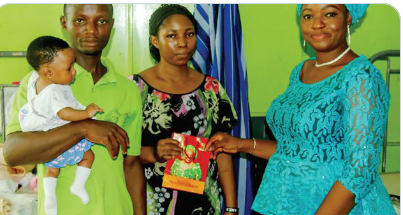 The wife of the Governor of Oyo State, Florence Ajimobi, and other well-meaning Nigerians have donated money to secure the release of Busayo Busari and her daughter, Fikayo, who were detained at the Lagos University Teaching Hospital, Idi Araba, Surulere, for four months over unpaid bills.

#NaijaLiveTv had reported that Busayo was delivered of her baby, Fikayo, through a caesarean section in February 2018.

After spending about four months at the hospital, the family’s medical bill rose to about N387,000.

READ ALSO: Heartbreaking Photo Of Mother And Her Baby Detained In LUTH For 4 Months Over Unpaid Bills

Some social workers at LUTH were said to have assisted in getting funds, which reduced the bill to N93,000.

Among those who responded to the report was Ajimobi, who delegated a team from Oyo State to visit LUTH to settle the bill.

Our correspondent learnt that when Ajimobi’s delegates got to LUTH, they were told that Busayo’s bills had been settled by a Good Samaritan, who visited earlier on Friday.

The Special Assistant to Ajimobi on Media, Mrs Oluwayemisi Owonikoko, said the team gave N100, 000 to the family.

Owonikoko said Ajimobi was moved by the plight of the family after reading the report.

She said, “When we got to the hospital this morning (Friday), we were told that she had been given some rebate and that some Nigerians had settled the bill. So, on behalf of Her Excellency, N100,000 was donated to the family for maintenance.

“On behalf of my principal, I appeal to other Nigerians, to always come to the aid of the needy in the society because it is when we help each other that we can improve our society. The leaders alone cannot do it; the milk of human kindness should always flow in us to help the needy.”

Another donor, Vincent Onyeabor, who was also swayed by Busari’s predicament, said he settled the bills.

He said, “I was seriously touched when I read that aside from doing menial jobs, the woman’s husband went as far as donating his blood to raise N6,000 just to feed. This situation was what the young man was experiencing amid zero hope of raising funds to settle the remaining bills of N93,000.

“I decided to make all necessary efforts to assist. I went online, extracted the news and broadcast to friends, colleagues and relatives. With the support of my boss and a few others, I raised N105,000, which was used to settle the N93,000 and other expenditure, including the taxi fare for the couple.”

A representative of the non-governmental organisation, Mrs Peju Osanaiye, said, “We reach out to people to alleviate their suffering because everybody deserves to live a good live.

“Through the initiative, we were able to raise some funds with which we got some items for the baby and also a cash gift for the parents.”

Our correspondent also gathered that some donors, upon learning that the bills had been settled, resorted to clearing the bills of other indigent patients in the hospital.

The family reportedly left for their house in the Sango Ota area of Ogun State around 8pm on Friday.

The couple thanked Nigerians for helping them.

Busayo’s husband, Mutiu, said, “We never expected that we would receive support from the wife of the Oyo State Governor, Mrs. Florence Ajimobi, and everyone that came to our aid. We are back to the house we left over four months ago. We have been through a lot, but we give God the glory.”