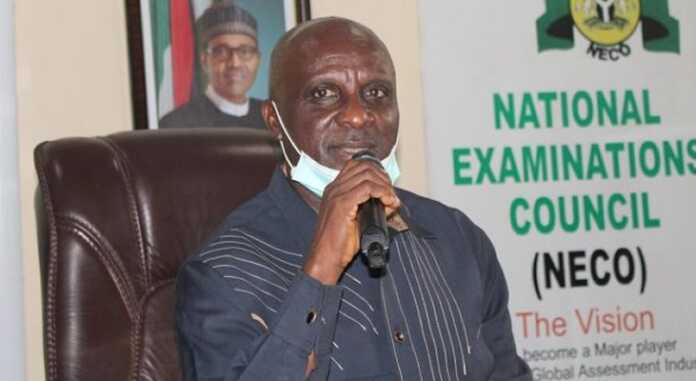 The Registrar of the National Examinations Council, Professor Godswill Obioma, is dead.

Obioma died on Monday night at his Minna residence in the Niger State capital.

The deceased’s wife, Mrs Elizabeth Obioma, told newsmen that her husband was killed by assassins. “The assassins came in and killed him and left without taking anything,” she reportedly said.

However, the son of the deceased in a letter addressed to the Director Human Resource Management, NECO, Mustapha Abdul, attributed the death of his father to a “brief illness”.

The letter which one of our correspondents sighted read, “Dear Sir, this is to formally inform you that my father, Prof. Godswill Obioma, the Registrar/Chief Executive of NECO passed to eternal glory yesterday, 31/5/2021, after a brief illness.

“We request that you kindly notify the Board, Management and the entire staff of the Council of this development.

“We shall keep you duly informed.”

Efforts to speak with the Niger State Police Command proved abortive as the police spokesperson neither picked nor return his calls and text messages as of the time of filing this report.

The 67-year-old indigene of Abia State was appointed NECO Registrar in May 2020.

Niger State in Nigeria’s North-Central has been a hotbed of killings and kidnappings of late as rampaging bandits terrorise the people of the state.

Just on Sunday, about 200 students of an Islamiyya school located at Tegina in the Rafi Local Government Area of Niger State were abducted.

One person was said to have been shot dead while another was critically injured after the gunmen carried out the kidnap operation on Sunday afternoon.