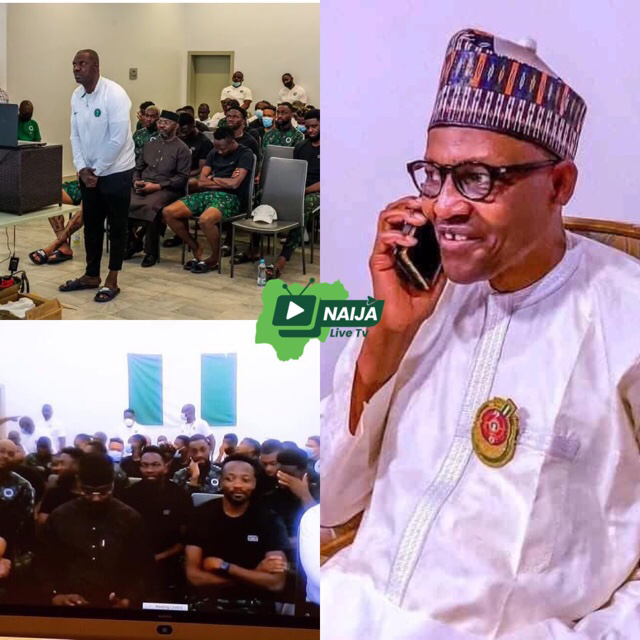 Some Nigerians on social media have attributed the loss of Super Eagles at the African Cup of Nations (AFCON) to President Muhammadu Buhari.

Nigeria suffered a 1-0 loss to Tunisia in round 16 of the ongoing tournament.

Before the game, many had tipped Super Eagles to win, especially as the Tunisian team was hit with Coronavirus, which affected 12 players, including the captain, and head coach.

Earlier on Sunday, President Muhammadu Buhari had spoken with the Nigerian squad via video call.

Coach Augustine Eguavoen had assured the president that his team would not let the nation down.

However, Nigeria, which put up the best performance in the group stage, suffered its first  loss on Sunday.

Reacting, some Nigerians on social media said the president ought not to have called the Eagles.

On Facebook, one Comrd Babangida Bukari, wrote: “Buhari Buhari Buhari, why do you call them?”

Hussaini Abdulkarim Maikudi, also a Facebook user, said, “Since when i heard buhari had a video call with super eagle, i know there success has come to an end.”

Idowu Olawale, said, “Dove refused to fly at eagles square as bubu threw them up, Bubu called super Eagles and the next match eagles refused to fly.”

Yakubu Umar, wrote “Just one call from this guy and everything came crashing down.”
On Twitter, one Amarachukwu, wrote: “Dear Lord, I refused to pick any call that will cause my downfall Folded hands
#Nigeriavstunisia.

Tweeting via @timiPR, another user, said, “May we not receive any call that will truncate our destiny.”
Waxing comical, Violence AspicPrince wrote, “Immediately Buhari called those boys, I know say wahala don dey #Nigeriavstunisia.”

Taking to his verified Twitter account, a former aide to ex-president Goodluck Jonathan, Reno Omokri, tweeted, “Iwobi red card, Iheanacho yellow card. All the time they have been playing this never happened. Why is it that it is the day they spoke to Buhari that these series of unwelcome events rained on us! Energies are very contagious. Avoid negative people!”

While also airing her opinion, delectable Nollywood actress Beverly Naya also blamed the president’s call for the Super Eagles loss. She tweeted, “It will always end in tears with the Eagles. Buhari even called, forgerrabout winning!”(sic)