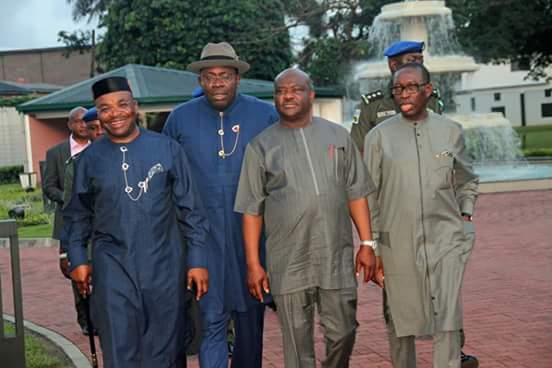 Six Governors, under the auspices of the South-South Governors Forum have resolved to unanimously work with like minds to ensure that, the country is restructured, returned to true federalism, with powers devolved from the Centre to the federating units.

The Governors said, for Nigeria to be stable, peaceful and prosperous, it should be restructured. They made this known on Wednesday, after an emergency meeting convened at the Rivers State Government House, Port Harcourt by the Governor of Bayelsa State and Chairman of the South-South Governors Forum, the Honourable Henry Seriake Dickson.

The Governors vowed to work with like minds across Nigeria to make Restructuring and fiscal federalism a reality!

A press statement signed by the Chief Press Secretary to the Governor of Bayelsa State, Francis Ottah Agbo said, the Governors also rejected the Waterways Bill being proposed by the Federal Government.

In the communique, which was read by Governor Dickson, the Governors also resolved to press for the release to the Oil producing states, the 13 percent derivation component of the $1b withdrawn from the Excess Crude Account by the FG to fight insurgency in the country.

He said: “Because of the nature of the discussions we have had, we invited the Attorneys-General of our respective states to be in attendance and we had very fruitful deliberation touching on critical national issues that affect the wellbeing and welfare, not just of our country, but principally of the people of this zone. First of all, everyone is aware of the ongoing clamour for devolution and a return to essential founding principle of this great country.

“And we in our meeting resolved as we have been speaking over sometimes that we associate fully with the clamour for restructuring, the clamour for true federalism and for the clamour for devolution of powers that are so concentrated at the centre to the federating units and we have agreed to support ongoing moves in that direction by working with like-minded Nigerians, who mean well for the country so that we can all have a stable and prosperous and peaceful nation. 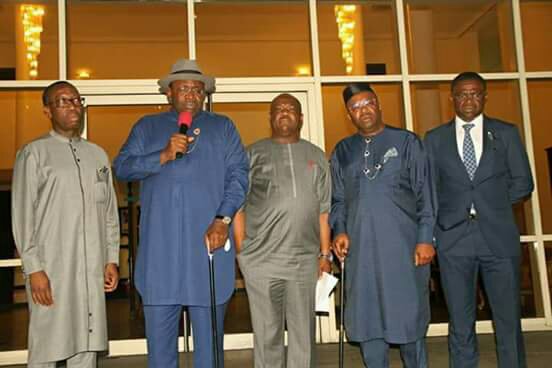 “Secondly, we took a collective view and decision that, with respect to the federal government effort to withdraw One Billion Dollars for national security expenditures, our position in this zone is that in line with the constitutional provisions of the nation, while we have no objections to the federal government spending money on national security, including the security in this zone, we believe that the constitutional provisions on 13 percent derivation should be applied and fully respected. We will communicate that to the appropriate authority so that whatever amount that is withdrawn in the excess crude account been proceeds of crude oil activities is subject to the 13 percent principle that is enshrined in the constitution. That is what we have agreed.

“Thirdly, we also agreed that the bill currently making round in the national assembly which we understand is an executive bill on management of water resources. We are of the view that the provisions of the bill are offensive and obnoxious, we disagree with the centralized control of water resources as we are already dealing with the problem associated with over centralization of our country and we have agreed that the bill should be immediately withdrawn by the federal government and further consultations be made on that.

“We want to thank the Government and People of Rivers State for been very gracious hosts and we will be meeting very soon to examine some of these developments in no distance time and we will keep you posted.”

It will be recalled that Dickson had raised the radar on the Restructuring campaign, which saw him visit President Muhammadu Buhari, APC Committee Chairman on Restructuring and Kaduna State Governor, Nasir Elrufai. Dickson has promised to visit more Northern leaders because according to him, “the North is indispensable for the Restructuring of Nigeria to see the light of the day!” The meeting was attended by the Governors of Rivers, Akwa Ibom, Delta, Bayelsa and the Deputy Governor of Edo State.