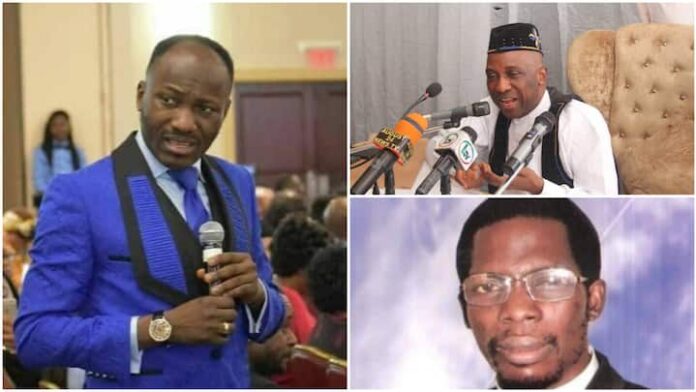 Every year, usually around December (of the previous year) and January (of the new one), Nigerian clerics, mostly the Christians, dish out prophecies; what God “told” them will happen in the New Year.

The year, 2021, was no different. FromApostle Johnson Suleman of the Omega Fire Ministries to Primate Elijah Ayodele of INRI Evangelical Spiritual Church, there was a “good dose” of prophecies cutting across different sectors.

The prophecies by some prominent Nigerian pastors missed the mark in 2021.

While some may appear to come to pass, a good number of the prophecies released by clerics failed woefully.

As they Year 2021 draws to an end in few hours, Legit.ng takes a look at the prominent failed prophecies released by the men of God.

From January up till the time of filing this piece in Friday, December 31, 2021, the last day of the year, no fire outbreak has been reported at the CBN headquarters in Abuja.

Kidnap and fights in Aso Rock
At the beginning of the year, Primate Elijah Ayodele, the leader of INRI Evangelical Spiritual Church, predicted that there will be cases of kidnap and fights in the Aso Rock and called for cleansing.

So, no kidnap case reported at the Presidential Villa. Prophecy failed.

A health minister and a commissioner will die of COVID-19

Primate Ayodele also predicted that COVID-19 ‘will kill’ a Health Minister and a commissioner, according to Sahara Reporters. Again, the prophecy failed. Woefully.

Number two citizen to become number one
Apostle Theophilus Ebonyi, the Senior Pastor of Faith on the Rock Ministry International, released a very sensitive prophecy, predicting that the nation would witness a shift in government where the number two will assume the number one position without an election or a coup.

Prophet Jeremiah Fufeyin is not left out. In his 2021 prophecies, the founder of Christ Mercyland Deliverance Ministry, said the secret behind the COVID-19 pandemic would be exposed in 2021.

“Everybody will know the secret behind COVID-19 this year; coronavirus is a useless thing, people will be exposed this year,” he predicted.
Up till now, no one has been exposed regarding any “secret” behind COVID-19.

Prophecies and their legal implications’.

VIDEO: ‘Wife of man who accused Apostle Suleman’ of sleeping with her reacts, says husband must be on drugs

Pastor Arrested For Allegedly Sleeping With Woman & Her...

Encourage yourself in the Lord