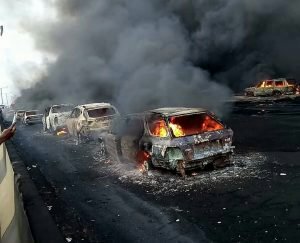 About 54 vehicles have been reported burnt while scores of people killed in an explosion involving a petrol tanker that occurred at the Otedola bridge end of the Lagos -Ibadan expressway on Thursday.

The explosion created heavy pandemonium on both sides of the ever-busy expressway as scores of.people struggled to escape from the area.

It was gathered that the fire created by the explosion engulfed virtually all the cars around the area.

Ten dead bodies have so far being brought out of some vehicles that were trapped when the fire started.

Although official figure as to the number of casualties was yet to be ascertained, it was gathered that over 40 cars have been razed alongside its occupants.

It was gathered that the casualty figure might be on the high side because of the huge vehicular traffic on the bridge before the explosion went off.

Already, emergency agencies like the Rapid Response Squad (RRS), the Lagos State Emergency Management Agency (LASEMA) and other secondary responders have been deployed to the scene.

He said the fire is now under control as rescuers from various government agencies are battling the situation.

However, the Lagos State Commissioner of Police, Imohimi Edgal, has advised motorists to avoid the Lagos- Ibadan expressway as a result of the petrol tanker explosion which occurred on the Otedola bridge.

WATCH THE LIVE VIDEOS BELOW: