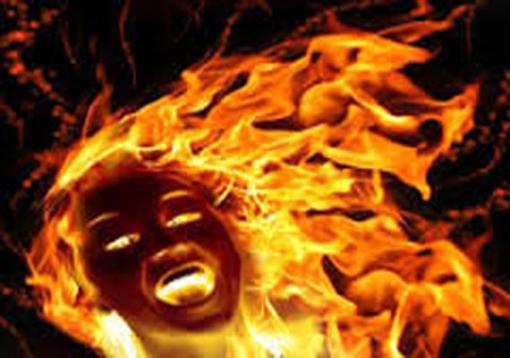 Tragedy on Tuesday struck in Delta State, after a motorcycle accident left a petrol black marketer burnt beyond recognition.

NAN reports that the incident occurred at Oghara town, headquarters of Ethiope West Local Government Area of the state.

The victim, identified by residents as Madam Gbogbo, was also said to be a dealer in second-hand clothes.

An eye witnesses said the accident also involved a jeep at Navy Junction on Ibori road.

“The woman was returning from a petrol depot with a jerry can of fuel she bought when the jeep knocked down her motorcycle.

“She was personally riding the motorcycle with the jerry can placed on the tank in front of her.

“The fuel exploded in the process, and there was nothing anyone could do to save her life,” one of them said.

Graphic images and videos sent to NAN showed the pregnant woman lying motionless in flames beside her burning motorcycle with sympathisers watching and wailing from afar.

In one of the images, firefighters are seen extinguishing the flame around the woman’s burnt remains.

When contacted, the Public Relations Officer of the Command, Mr Andrew Aniamaka who confirmed the incident said the driver of the vehicle had been taken into custody, while investigation was ongoing into the circumstances surrounding the incident.