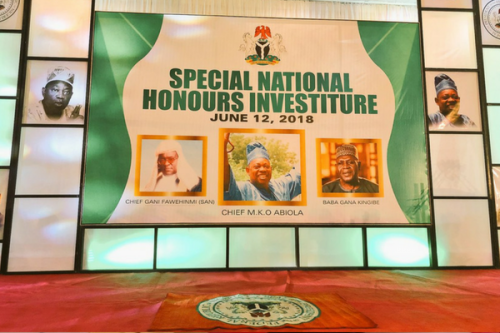 Femi Falana, a human rights lawyer, was critical of the actions of Baba Gana Kingibe, the running mate of late Chief MKO Abiola, during the investiture ceremony organised to honour the heroes of the June 12 struggle, a source who was at the event has told Saharareporters.

On June 6, President Muhammadu Buhari announced that he was going to honour the late Chief MKO Abiola with the title of Grand Commander of the Federal Republic (GCFR) and his running mate Babagana Kignibe, Grand Commander of the Order of the Niger (GCON). Buhari also declared that the annual Democracy Day would now be celebrated June 12.

Following this announcement, the presidency released a list of guests expected to attend the investiture.

Femi Falana and Babagana Kingibe were among those invited.

During the ceremony, a source who spoke with Sahara Reporters said that Kingibe, who was also one of the honourees, was exchanging pleasantries with dignitaries in the hall. But when he reached Falana’s seat, he made a joke that infuriated the Lagos-based lawyer.

According to the source, Kingibe said Falana and his cohorts hijacked the struggle of June 12 from those considered by Kingibe to be the real heroes of the struggle.

Falana, who is known for standing on his opinion vehemently, did not take kindly to Kingibe’s joke.

He jibed Kingibe as the one who had the opportunity to become the country’s Vice President but abandoned his principal in the struggle to become a Minister under the General Sani Abacha, Nigeria’s military Head of State at a time.

Kingibe was Nigeria’s Minister of Internal Affairs between 1993 and 1995 when Abacha was the Head of State.

Speaking with Sahara Reporters, the source said the altercation almost got out of hands but for the timely intervention of other dignitaries in the hall.

The source added that both Falana and Kingibe were relocated from their seats.

Kingibe first contested against Abiola during the primary election of the Social Democratic Party. Abiola won the primaries and he officially became the flag bearer of SDP. When the time came for Abiola to pick his running mate, he picked Babagana Kingibe.

Why Obasanjo refused to recognise June 12