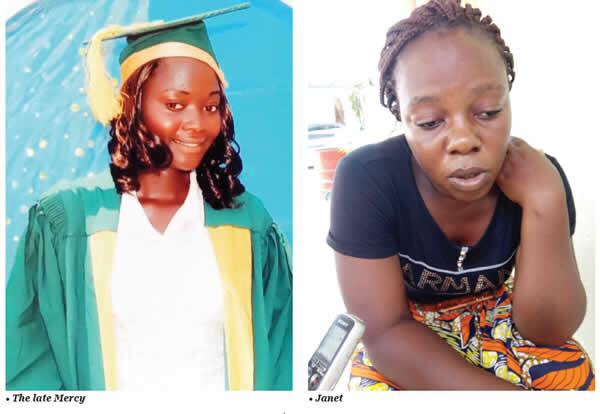 Janet Victor is the elder sister of Mercy Victor, a final year student of the Taraba State College of Nursing and Midwifery, Jalingo, who died after she was allegedly raped and stabbed by unidentified persons in Jalingo penultimate Sunday. She speaks about the incident with JUSTIN TYOPUUSU

What led to the death of your younger sister?

I was not with her when the incident happened. The information available to us is based on what we heard from people. Mercy was staying in a rented apartment close to her school, Taraba State College of Nursing and Midwifery in Jalingo. But on Monday morning, I got a call that my sister was in the hospital and I quickly called our mother who is in the village in Gembu, in the Sardauna Local Government Area of the state and she asked me to go to the hospital and check what was wrong with her.

I got to the hospital that morning only to meet her struggling on her hospital bed at the emergency unit of the Federal Medical Centre. She was unconscious. I couldn’t hold myself as tears rolled freely down my cheeks. She was really in pains and had lost lots of blood. The doctors told me they needed two pints of blood and there was a need to do an emergency head surgery on her and I should go and look for money for the treatment to commence.

I looked up to God because I did not have any money on me. I prayed within me and started calling my uncles and friends, but help did not come from anywhere.

What did the hospital management say when you couldn’t raise the money for the surgery?

I begged them but the doctors too needed the money to buy some things to commence treatment. While I was making efforts, someone gave me a phone number of one of the aides to the Speaker of the state House of Assembly and on getting to the Speaker’s house, I was told that the Speaker was still sleeping and I couldn’t wait because my sister’s life was in danger. While I was still there, my mother called me to rush back to the hospital, because we didn’t know when she could wake up. Fortunately for me, on getting back to the hospital, I met my uncle who I stay with in Jalingo. He told me not to worry that he was going to settle the bills.

Did your sister ever complain to you of any threat to her life prior to the incident?

No, she never complained of anything to me or any member of our family. She was gentle and could not even hurt a fly.

How true is the story that she was returning to school from town where she spent a weekend when the incident happened?

Like I said earlier, I was not staying with her in the school. But one of her neighbours told me that Mercy was in her room with a friend watching a movie that Sunday evening when she received a call around 9pm. They said she thereafter told her friend that she was going out to see somebody and would be back shortly. From what I was told, it was around 11pm that they got a call that Mercy was lying helplessly on the road.

Did her roommate tell you who the caller was?

No, she didn’t. She said Mercy did not disclose the caller and that she went out with her phone.

What is the family doing to unravel what led to her death?

Well, we are doing what we can. We have reported the case to the police and the Department of State Services and they are doing their investigations.

It was gathered that the deceased was in final year. Did she ever share with you her dreams after graduation?

Yes, I remember in one of our discussions, she mentioned to me that she would like to further her education and work in one of the reputable hospitals in Nigeria, if she must work in Nigeria. She was also planning to leave the country by the end of the year.

You said earlier that you informed your mother that Mercy was in the hospital. Is she aware of her death?

She is aware. It’s really painful, but she has accepted the situation. It’s painful because we lost our father on February 13 last year, and this year, this unfortunate incident happened. It’s a personal loss to me because I have lost my dearest only sister.

How old was Mercy and how many are you in the family?

Mercy was 23 and we are four in the family. Mercy’s twin brother is at home in Gembu with our mother. Our brother who came from Maiduguri on Wednesday is the eldest. I am the second child.

What is your appeal to the government and security agencies?

All we want is justice for Mercy. We want to know her killers so that they can tell us what Mercy has done to them to deserve this kind of evil act. We want the government to help us unravel the killers. Mercy is gone and all we can ask for now is justice. We want justice to be done and the killers brought to book to account for their evil actions.

Where is your sister’s body now?

She was buried last Saturday in our village in Gembu. We would have done the burial earlier, but because of some issues and police investigation, they could not release the corpse to us immediately as we wanted. We had a tense atmosphere in the village during the burial because nobody expected what happened. Mercy was a loving, caring lady and full of life. We are consoled by the fact that God who permitted her death knows better.

How is your mother reacting to the development now?

My mother is not finding it easy at all. She is really worried and personally, I don’t know what to do. We are in the village with her. I will get a doctor to examine her to know her state as she is really worried about the incident. For now, people keep visiting to sympathise with her and I believe it will relieve her of too much thinking.

How far have the police gone with the investigation?

Investigation is still ongoing. The girl we suspect had a hand in her murder is still with the police. They are also making efforts to track her last phone conversation; so we are waiting to hear the outcome of their investigation. Like I told you earlier, all we want is to see the killers of Mercy. We are also praying seriously about it and I believe God will expose them.